According to the organising board, the ninth national tourism photo contest attracted more than 15,000 entries from nearly 1,120 contestants across 63 cities and provinces nationwide, including 14 foreigners who are living in Vietnam.

Following the theme ‘Exploring Vietnam’, the entries captured a charming Vietnam and the country’s diverse culture through various topics such as cuisine, seas and islands, natural landscapes, cultural heritage, daily life, and festivals.

Three third and five consolation prizes were also presented to other outstanding entries.

The organising board selected the 181 best entries of the contest to exhibit at the Vietnam Military History Museum from September 24 to 30. 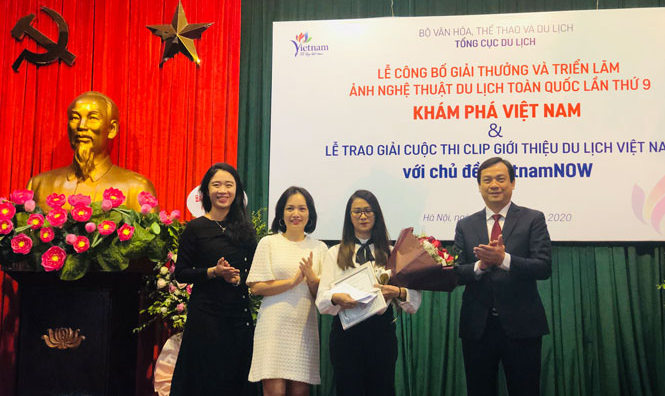 Meanwhile, with the theme ‘VietamNow’, the video-making contest drew the participation of 28 entrants both at home and abroad with a total of 53 submissions. The videos filmed the contestants’ exciting experiences and journeys while exploring the beauty of the land, people and culture of Vietnam.

The special prize was awarded to ‘Quang Binh – He Nay Phai Di’ (Quang Binh – A Must-visit Place this Summer’ by Le Tuyet while first prize was presented to “The beauty of Nature, Culture and Humans” video by Vu Huong Giang.

According to VNAT General Director Nguyen Trung Khanh, the entries submitted to the two events will contribute to advertising Vietnam’s tourism and attracting visitors to the country.