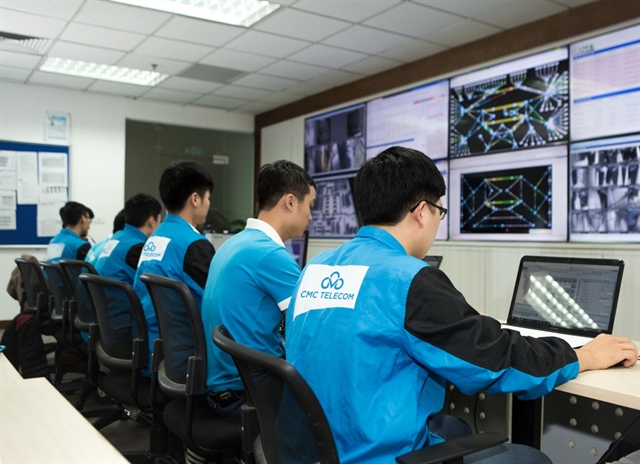 Tech group CMC’s telecommunication technicians at their office. The company shares gained on Thursday morning to lift the VN-Index up slightly. — Photo cmc.com.vn

The benchmark VN-Index on the Hồ Chí Minh Stock Exchange edged up 0.23 per cent to end at 990.10 points.

The VN-Index slid 0.04 per cent on Wednesday.

Technology, energy and pharmaceuticals were among the sectors that boosted the stock market in the morning session.

The three sector indices were up between 0.6 per cent and 0.7 per cent, data on vietstock.vn showed.

But market trading liquidity was modest, pointing out that investors were quite cautious at the moment.

More than 77.6 million shares were traded on the southern bourse, worth VNĐ1.64 trillion (US$70.5 million).

The US and China will discuss solutions to end their trade war in Washington on Thursday and Friday (local time).

Based on the track records, it is uncertain that the two sides will reach an agreement this time especially after they have announced some strict regulations on each other this week, analysts have forecast.

The northern market index had gained total 0.86 per cent in the previous two trading days.

Nearly 18 million shares were traded on the northern bourse, worth VND245.6 billion.