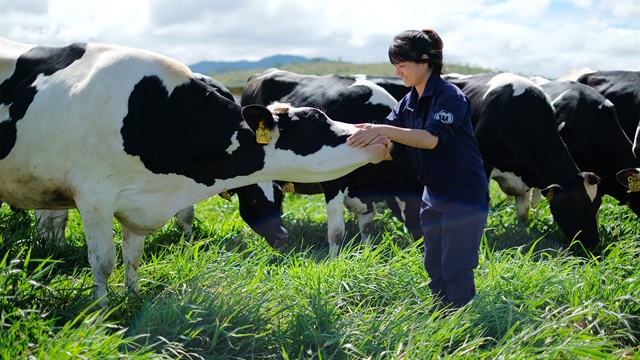 Cows at a Vinamilk farm. Among large-cap stocks that declined on Friday, Vinamilk (HoSE: VNM) dropped 1.2 per cent. — Photo baochinhphu.vn

HÀ NỘI — Việt Nam’s benchmark VN-Index fell back to 990 points on Friday as stocks were hit strongly on the last day exchange-traded funds (ETFs) completed reviewing their portfolios.
The VN-Index on the Hồ Chí Minh Stock Exchange (HoSE) dropped 0.68 per cent to close at 990.36 points.
The benchmark index was up slightly 0.20 per cent on Thursday.
Friday’s decline almost wiped out all gains the benchmark made this week.
After five trading days, the VN-Index went up 0.32 per cent from the previous week. It gained as much as 1.0 per cent during the week.
Investors were clearly cautious on Friday as the VN-Index rose slightly in the morning session and began falling when it was near 1,000 points, MB Securities Co (MBS) said in its daily report.
The review of ETFs’ investment portfolios and net foreign selling were the main reasons for the market’s decline, MBS added.
Foreign investors net-sold more than VNĐ366 billion (US$15.73 million) on HoSE, targeting the likes of real estate firm Vingroup (VIC), insurer Bảo Việt Holdings (BVH) and Vietcombank (VCB).
Other declining large-caps included Novaland (NVL), Sacombank (STB), SSI Securities Corp (SSI) and dairy producer Vinamilk (VNM).
Those large-cap stocks declined and dragged the large-cap VN30-Index down 0.40 per cent. Small-cap and mid-cap indices also fell 0.07 per cent and 0.55 per cent, according to HoSE.
Pulling the market down were real estate, agriculture, food and beverage, construction, insurance, banking and brokerage sectors, data on vietstock.vn showed.
These sectors’ indices were down between 0.7 per cent and 1.8 per cent.
More than 203.6 million shares were traded on the southern bourse, worth VNĐ5.64 trillion. Across the market, 171 stocks lost ground and 139 stocks advanced.
It was clear that the VN-Index was not ready to conquer 1,000-point level when investors were very cautious during the day, MBS said.
But technically, the market’s short-term uptrend was not affected and it was not too bad if the VN-Index continued swinging in the 990-1,000 point range, MBS added.
Such a scenario was somehow positive when large-cap stocks were running out of gaining momentum and capital focused only on some particular stocks with good growth prospects, the company said.
On the Hà Nội Stock Exchange, the HNX-Index inched up 0.10 per cent to end at 104.14 points.
The northern market index has rallied a total 4.17 per cent in eight straight trading days since September 11.
After one week, the HNX-Index added nearly 1.9 per cent from the previous trading week.VNS