Home Economy Vietnam’s exports in 2018: risks from protectionism anticipated
VietNamNet Bridge – The Ministry of Industry and Trade (MOIT), in its latest report on global trade and the impact on Vietnam, mentioned the possibility of a trade war and the risks of protectionism. 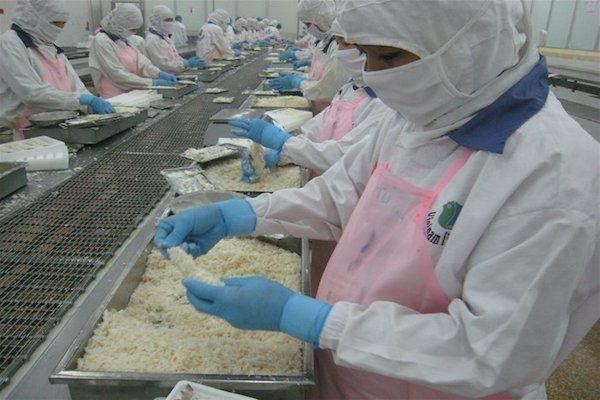 Vietnam’s seafood exports in 2017 were satisfactory

The signs of protectionism returning are clear. The US, for the first time after many years, has applied global safeguard measures in trade.

India has prohibited the import of pepper if import prices are lower than the price level set by the Indian Government. And Indonesia only imports smartphones made by companies which have production bases in Indonesia.

According to secretary general of the Vietnam Association of Seafood Exporters and Producers (VASEP) Truong Dinh Hoe, Vietnam’s seafood exports in 2017 were satisfactory, with $8.3 billion worth of turnover, an increase of 18 percent over 2016.

However, Hoe also expressed concern over the return of protectionism, which will make it difficult for Vietnam’s exports to enter large markets, especially the US.

Exports to the US decreased by 3 percent to $1.4 billion in 2017, which was blamed on the US catfish inspection program and anti-dumping duties on shrimp and catfish.

The shrimp exports to the US decreased by 7.5 percent that year, while catfish exports fell by 10 percent.

Wooden furniture manufacturers have also shown concern about protectionism, though they had a prosperous y2017.

According to Vifores, woodwork exports brought $8 billion in 2017, with which woodwork ranked seventh among export items with largest export turnover.

The satisfactory export results were gained thanks to the US anti-dumping lawsuit against imports from China and the Chinese government’s policy on taxing exports. The labor shortage and high labor costs in China, Malaysia and Indonesia also facilitated Vietnam’s exports.

Sources said the Trump administration is considering imposing a tax on imports from China. If this happens, Chinese businesses are likely to flock to Vietnam to set up production bases and make products for export to the US.

If so, exports from Vietnam may soar.

To Xuan Phuc, an expert at Forest Trends, confirmed that timber associations have reported a sharp increase of Chinese investments in the woodwork industry.

“The move aims to help Chinese enterprises avoid US taxation on Chinese sourced imports,” he said.

Also according to Phuc, in Vietnam-US woodwork trade, Vietnam has a surplus of $2 billion. The surplus, plus massive Chinese investments in the woodwork industry in Vietnam, would make the US ‘pay more special attention to Vietnam’.