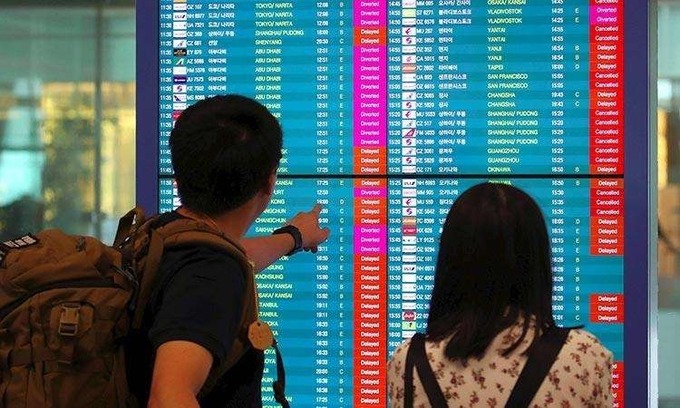 Hundreds of flights to Japan have been cancelled and delayed as Typhoon Faxai is forecast to hit Tokyo on September 9, 2019. Photo by AFP.

Vietnam Airlines and Vietjet Air have rescheduled their flights to Tokyo as Typhoon Faxai bears down on the city Monday morning.

The national flag carrier said in a statement Sunday that six flights scheduled to depart from Hanoi, Ho Chi Minh City and Da Nang City to Tokyo will be delayed by between two to three hours and 25 minutes.

Passengers inconvenienced by the changes will be given alternative options.

Airline officials have requested passengers to keep themselves updated on the status of their flights and to keep track of weather conditions and announcements from the carrier.

Typhoon Faxai, packing winds of up to 216 kph (134 mph), is forecast to hit coastal areas near Tokyo in the late hours of Sunday into Monday morning, the Japanese Meteorological Agency said.

The storm has already forced train operators to suspend major routes in the capital during Monday morning rush hours, while grounding more than 170 flights. Some coastal highways west of the capital in Kanagawa have been closed due to the storm, AFP reported.