The World Records Union (WorldKings) has recognized three Vietnamese individuals as having record collections of some rare items.

The recognition was accorded at meeting of record holders held Monday in Ho Chi Minh City.

Hanoi-born Dao Xuan Tinh has set a WorldKings record for the largest collection of Peugeot bicycles made in France between 1918 and 1992. He has 128 of them so far.

Part of what makes his collection very special is that all of his bicycles come in pairs – with one male and one female bike for each model. The bikes are also arranged by year and color.

Collecting antique Peugeot bicycles has been a decades long passion for this man who travels across Europe looking to purchase and bid on the bikes he dreamed of as a kid.

The Chu Dau ceramic plate with a calligraphy design having the word Long (Dragon) written in Chinese characters a thousand times is also the world’s largest such item. It is owned by the Chu Dau Ceramic Company.

The plate, which has a diameter of 1.5 meters, was offered as a gift to Hanoi on the 1,000th anniversary of its foundation.

Chu Dau ceramics were recognized as “Royal symbol products” at the end of 17th century.

Nguyen Van Phung from the central beach resort town of Nha Trang joined the list of world record holders with the biggest collection of products made from scrap tires.

He began researching and designing handmade products with scrap tires in early 2016. He has made more than 500 products including watches, belts and lamps. 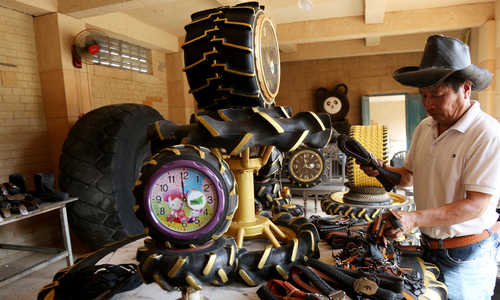