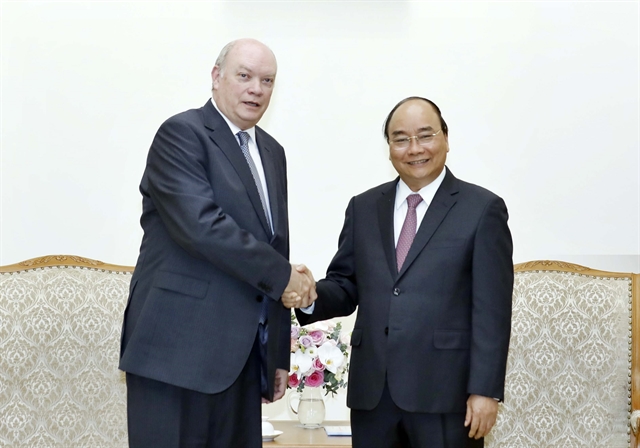 HÀ NỘI — Prime Minister Nguyễn Xuân Phúc received Cuban Minister of Foreign Trade and Foreign Investment Rodrigo Malmierca Diaz in Hà Nội on Tuesday, pledging to encourage Vietnamese firms’ investment in the Caribbean nation.
Welcoming the delegation to Việt Nam for a meeting of the Việt Nam-Cuba Intergovernmental Committee, Phúc said Việt Nam was delighted at the socio-economic achievements Cuba had obtained recently, noting that the two peoples had a special and faithful relationship that was increasingly consolidated.
Minister Rodrigo Malmierca Diaz vowed every effort to help the inter-governmental committee work effectively.
He said although the Cuban economy was facing numerous difficulties due to sanctions, it was still striving to move forwards. He also appreciated Việt Nam’s rice supply for his country and expressed his hope that the Vietnamese Government would create conditions for businesses to continue the provision.
Highlighting both countries’ resolve to raise bilateral trade to US$500 million in 2020, the official said Cuba wanted to boost exports to Việt Nam, especially healthcare services and biological products, and also wished to attract more investment from the Southeast Asian nation as there are many Vietnamese firms operating effectively in Cuba at present.
Cuba was considering mechanisms and policy improvements to better its investment climate and attract more foreign investment, he noted, adding that as Việt Nam was experienced in agriculture, his country hoped Việt Nam would assist in this field.
As the two countries mark 60 years of their diplomatic relationship in 2020, they should work closely together to organise many practical celebratory activities so as to further promote the traditional friendship, Rodrigo Malmierca Diaz said.
He added Cuba highly valued Việt Nam’s growing role and stature, especially when Việt Nam will serve as a non-permanent member of the United Nations Security Council for 2020-21 and the ASEAN chair next year.
At the reception, Phúc said the Communist Party and people of Việt Nam always kept in mind the strong support and wholehearted assistance from the Communist Party and people of Cuba during the struggle for national independence and reunification in the past as well as the building of a socialist nation at present.
Việt Nam would continue to work closely with Cuba to ensure stable rice supply and promote its investment in the Caribbean country, he affirmed.
Regarding agricultural co-operation, Việt Nam was ready to assist Cuba on the basis of the latter’s potential and advantages, he said, welcoming Cuba’s intention to boost the export of healthcare services to Việt Nam.
The PM also asked the two countries’ ministries and sectors to continue researching solutions to advance bilateral relations in a result-oriented manner.
He stressed that Việt Nam always supported the Cuban people’s just fight and consistently advocated Cuba’s stance at UN forums. — VNS