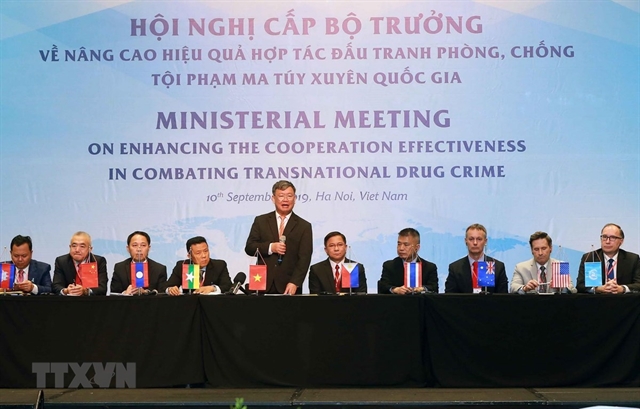 More than 200 people took part in the event from seven Asian countries along with partners from the US’ Drug Enforcement Administration, Australian Federal Police and the United Nations Office on Drugs and Crime (UNODC) in Hà Nội yesterday. — VNA/VNS Photo

HÀ NỘI — Việt Nam is committed in the fight against illegal drugs, Deputy Prime Minister Trương Hoà Bình said yesterday.
He was speaking at the opening ceremony of the two-day ministerial meeting on enhancing cooperation effectiveness in combating transnational drug crime.
Held in Hà Nội, more than 200 people took part in the event from seven Asian countries along with partners from the US’ Drug Enforcement Administration, Australian Federal Police and the United Nations Office on Drugs and Crime (UNODC).
“On behalf of the Socialist Republic of Việt Nam, I want to reemphasise Việt Nam’s goodwill, determination and commitment in strengthening cooperation with UNODC and national drug enforcement agencies of countries in the region and the world,” Deputy PM said.
“Việt Nam has been and always will be an active and responsible member, always siding with the international community in implementing the commitments and agreements, for the sake of drug-free prosperity and mutual development.”
Constant contacts with foreign drug agencies are also expected to help consolidate the capacity of Việt Nam’s own drug law enforcement personnel and officials.
Deputy PM Bình said drugs were a global menace that brought adverse consequences to all socio-economic aspects of a country, especially given that it often bred other crimes such as terrorism sponsoring, corruption and money laundering.
Deputy PM Bình said in the last 20 years, the Vietnamese Government had remained consistent in its policies against drugs – directing the whole political apparatus to focus on deploying measures aimed at reducing supply and demand.
He said they also reviewed and assessed the implementation of the Law on preventing drug crimes adopted in 2000 to reinforce legal foundations to combat the problem.
The Vietnamese Government also invested in methadone-based addiction treatment for 50,000 drug addicts each year, while making sure that all detected opium poppy areas are destroyed and put under surveillance to prevent re-cultivation.
In the first half of 2019, Vietnamese enforcement authorities busted and investigated nearly 12,000 cases related to drug trafficking, production and possession, seizing tonnes of synthetic drugs and uncovering many cross-border drug rings that were led by foreigners.
The number of drug users in the region had risen while cross-border drug gangs had been getting more brazen and vicious in fighting back the enforcement authorities, Deputy PM said, adding these complicated developments might have negative impacts on each regional countries’ progress in implementing UN’s sustainable development goals.
He hoped that this meeting, an initiative by Việt Nam, would serve as an effective and practical platform for drug agencies to exchange information, experience and update each other on their countries’ situations and the results of the fight against drugs.
The Vietnamese Government representative also called on dialogue partner organisations for more support – in both material supply and training courses – for drug officials and law enforcement personnel in countries in the region, and to help effectively realise the countries’ anti-drug initiatives and programmes.
Vietnamese minister of public security Tô Lâm said that as the chair of ASEAN in 2020, Việt Nam would focus on tackling the drug issues in the infamous Golden Triangle region, based in the sub-Mekong region and also the second largest producer of heroin in the world.
The meeting, which was attended by representatives from Việt Nam, Thailand, Laos, Cambodia, Myanmar, Philippines and China produced a joint statement, which stressed international cooperation and multilateral information exchange and the need for strong, coordinated crackdowns on drug trafficking routes from the Golden Triangle. — VNS