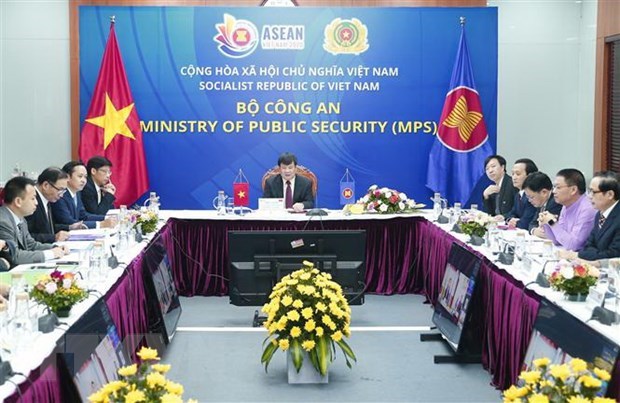 Despite travel restrictions throughout the region, drug trafficking is still happening in border areas, while cybercrimes and high-tech crimes have reportedly increased in both numbers and seriousness.

According to a representative of the ASEAN Secretariat, the increase of virtual transactions has helped criminals commit online fraud.

As host of the meeting, the Philippines said tightening unity among ASEAN member countries and strengthening their legal co-operation should be promoted, especially in crime investigation and information exchange.

The Philippines also called for consistent and systematic implementation of crime-controlling strategies.

Lt. Gen. Nguyễn Thanh Sơn, head of the Foreign Relations Department under the Ministry of Public Security, said social distancing and the increase in online working had created favourable conditions for cybercrime.

Fake news and incorrect information relating to COVID-19 made the public confused and harmed social order and security, he added.

During the pandemic, the smuggling and trading of fake or poor-quality essential products, as well as medical supplies, had also increased, Sơn said.

“Việt Nam calls for ASEAN countries to build trust and to be willing to take part in high-level information exchange among their law enforcement bodies so that no organisations or individuals can take advantage of staying in one country and violate laws of other countries,” Sơn said.

“ASEAN countries’ law enforcement agencies need to maintain and strengthen their co-operation in the fight against transnational crime,” he said.

Besides improved information exchanges, the agencies could conduct joint operations to crack down on transnational crime rings as well as to improve the legal framework for crime-fighting co-operation among ASEAN members and between ASEAN and its partners, Sơn said.

The official also proposed enhancing joint patrols and completing legal documents to create a legal framework for co-operation within the bloc as well as between ASEAN and partner and dialogue countries.

As host of the 14th ASEAN Ministerial Meeting on Transnational Crime (AMMTC-14), slated for mid-November, the Ministry of Public Security is committed to working with ASEAN law enforcement agencies to address tough issues as well as regional and global challenges that threaten peace, security and stability in the region, he pledged.

The ministry will continue to be part of efforts to promote a united and self-reliant ASEAN Community for peace, stability, and prosperity in each country and the region, he said. — VNS