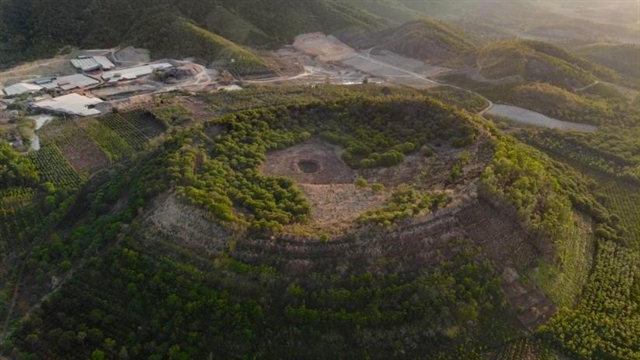 Part of the Đắk Nông Geopark has been recognised as a Global Geopark by UNESCO. — Photo nhandan.org.vn

ĐẮK NÔNG — The UNESCO Programme and External Relations Commission of the 209th Executive Board has recognised the Đắk Nông Geopark in the Central Highlands province of Đắk Nông as a Global Geopark.

Located on the M’Nông plateau at average elevation of 600-700m, the Geopark – the Land of Sounds – includes some 65 heritage sites including craters, a system of 50 caves created by volcanoes running a total length of 10,000m and waterfalls.

In many caves, archaeologists have discovered interesting features of natural geology and traces of early humans. The Geopark can be reached by several routes by land and air, including two international border gates with Cambodia.

A population of 416,000 people of 40 ethnic groups, including three autochthonous, live in the area, working mostly in agro-forestry, trade and services, and small industries.

Many archaeological, historical and cultural relics as well as scenic spots are recognised and conserved.

Festivals and traditions celebrated by ethnic cultures, in particular the UNESCO “Gong Culture Space” intangible heritage (including man’s oldest lithophone) also contribute to the values of the geopark.

Tourists can visit the cave system running inside a basal rock mountain, which starts from Krông Nô District and is the longest volcano cave system in Southeast Asia.

Following the UNESCO recognition, relevant agencies, including the Việt Nam National Commission for UNESCO, the Ministry of Natural Resources and Environment and provincial authorities, along with domestic and international scientists will jointly implement plans on environmental protection, natural conservation, and rational use of resources in the park.

They aim to preserve and maximise values of geology, biodiversity, culture, history, as well as ethnic traditions of the geopark. — VNS

Online concert to raise funds for doctors in COVID-19 fight

US commemorates 25 years of diplomatic relations with Vietnam

Online concert to raise funds for doctors in COVID-19 fight