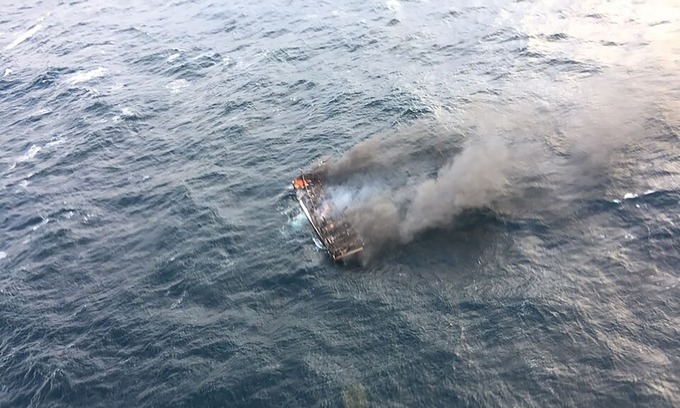 Police in South Korea confirmed on Wednesday two bodies found near a sunken fishing boat in the resort island of Jeju were Vietnamese citizens.

The 29-ton “Daeseong” boat sank in waters about 76 km west of Chagwi islet, near the country’s southern resort island of Jeju, on November 19 after being engulfed by a fire.

Six South Korean and six Vietnamese sailors were aboard the boat. One 60-year-old South Korean sailor was found and taken to a hospital, where doctors pronounced him dead.

On Sunday, two bodies were retrieved some 44 meters and 50 meters under the sea near the sunken boat, according to the Vietnam Labor Management Board in South Korea.

After the DNA tests, the two bodies were confirmed as those of Vietnamese sailors Nguyen Van Cong and Nguyen Tien Ninh, both aged 32.

The bodies of the victims will be transferred to their families through the Vietnamese embassy in South Korea, officials said.

The Korea Jeju Coast Guard said that based on autopsy results, the two sailors appeared to have died of carbon monoxide poisoning, and there was evidence of high temperatures in their internal organs.

Nine other sailors were still unaccounted for.

South Korea is one of the largest labor export markets for Vietnam. There were over 143,000 Vietnamese migrant workers in South Korea last year, the majority of them registered under the Employment Permit System, according to official labor reports.

Christmas in Vietnam: Next best thing to snow