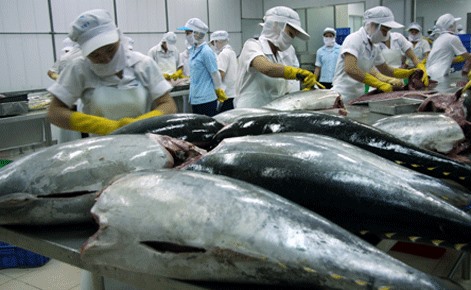 Workers process tuna at a factory. Marine product exports are expected to rise to US$3.5 billion this year, up 17 per cent from 2018. — VNA/VNS Photo

HÀ NỘI — Exports of Vietnamese tuna to Italy soared by 8,599 per cent last month over the same period last year.

This staggering increase transformed Italy into Việt Nam’s largest tuna market in the EU in the first nine months of this year.

The figures were announced by the Việt Nam Association of Seafood Exporters and Producers (VASEP) last week.

Canned tuna was still the only export product group to post growth over the same period, up 22 per cent. Meanwhile, Việt Nam’s exports of fresh and frozen tuna decreased by 30 per cent.

The EU’s abolition of tax on fresh and frozen tuna products right after the agreement came into effect has made these Vietnamese products more attractive for EU countries.

Besides, Vietnamese processed and canned tuna products are also attractive to this market. This showed the door to the EU market was opening wider for Vietnamese tuna businesses, said VASEP.

The country’s tuna exports to the US showed signs of recovery in the last two months after a period of decline due to the impact of the COVID-19 pandemic.

Tuna export value of Việt Nam to the US reached more than US$25 million last month, up 2 per cent over the same period last year.

The market for canned tuna in the US, after a long period of gloom, has shown good growth due to its familiarity with most consumers and the disruption of beef, pork and poultry supplies due to the pandemic.

In addition to the US and EU markets, Việt Nam’s tuna exports to Japan and Canada also grew last month.

After three consecutive months of decline, tuna exports to Japan have increased again. Meanwhile, Canada is a bright spot market for Việt Nam this year, with continuous three-digit growth in recent months. — VNS