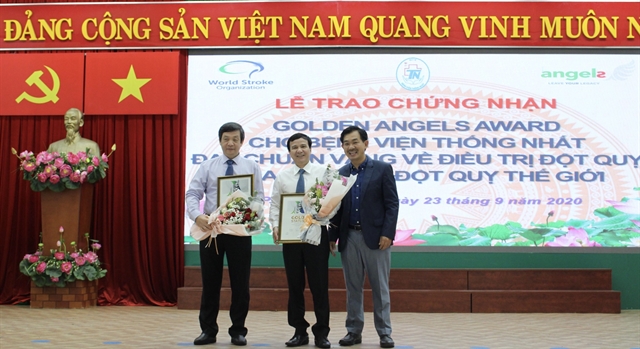 Thống Nhất Hospital in HCM City receives the Golden Angel Award of World Stroke Organisation for its achievements in the treatment of stroke at a ceremony on September 23. — Photo courtesy of the hospital

HCM CITY — Thống Nhất Hospital in HCM City on September 23 was presented the Golden Angel Award from the World Stroke Organisation for its achievements in the treatment of stroke.

Dr Lê Đình Thanh, the hospital’s director, said the hospital had closely worked with its divisions to develop the stroke unit.

The hospital has sent its doctors to attend domestic and international training courses relating to stroke treatment, and is equipped with many modern machines.

It has worked with other hospitals in the city to admit and treat stroke patients promptly, leading to an increase in the number of patients treated during the “golden time”.

In the first six months of the year, it treated 376 stroke patients. Of these, 7.4-7.9 per cent of cerebral infarction patients were treated. Most of their functions recovered well and they could move and do normal activities.

The hospital aims to win the Platinum Angel Award in 2021. It will invest in one more system to co-ordinate the CT and DSA systems to shorten the time for diagnosis and intervention, which is a prerequisite for saving stroke patients and reducing risk of future disabilities.

“Stroke causes a high risk of fatality and is a huge burden on families and society if it is not treated early and correctly,” Thanh said.

According to the World Stroke Organisation’s standards, besides early treatment during the “golden time”, preventive measures against reoccurring strokes must also be taken, Thắng said. — VNS

No new COVID-19 cases this morning

Central region residents get help to clean up after historic floods