HÀ NỘI — When it comes to working on rigs, safety is paramount.

At the Hải Thạch – Mộc Tinh gas field workers must strictly follow safety rules and not make any mistakes. Everyone must work together to ensure smooth co-operation.

According to Trần Hồng Nam, former general director of BIENDONG POC, reservoir pressure and the fracture pressure are two major causes of concern.

The key thing is that the difference between the reservoir pressure and the fracture pressure is too small, only about 5-10 bar (about 5-10 atm). But under the vertical depth of more than 4,000m in Hải Thạch – Mộc Tinh, controlling such a small pressure index by the weight of drilling fluid is a big challenge for drillers.

But no matter how hard it is, the task still needs to be completed with no room for errors.

The problem was then solved by improving drilling fluids, controlling them meticulously and carefully.

The well’s heat will make the drilling fluid soar to temperatures of around 70-80oC, sometimes up to nearly 100oC as the water keeps evaporating.

Although machines will handle the fluid for reusing or disposing purposes, during the drilling process, people come in close contact with it. It is not only hot but also contains chemicals that are toxic to human health when inhaled.

Võ Văn Phúc, who has worked on the rig for many years, said the team is motivated by patriotism and the determination to assert Việt Nam’s sovereignty.

Everyone on board the platform wants to contribute to the construction of the sustainable marine project, which is a milestone to assert the sacred sovereignty of the homeland’s sea and islands.

Now their wishes have come true. The East Sea 1 Project is a great success, with the PQP-HT central technology rig standing in the middle of the East Sea and being given the name “Marine Dinosaur”.

In 2010-11, Nguyễn Văn Thọ, project manager of the drilling project, said that during the initial drilling time, there were so many difficulties and small errors halted construction. But from the second year onwards, when everyone became familiar with PV DRILLING V’s technology equipment and workflow, everything fell into place. Four consecutive years later, the PV DRILLING V rig’s safety was absolutely ensured with very high drilling efficiency, up to 95 per cent.

Although before the construction of the new TAD rig, workers carefully calculated technical design with special geological conditions at the Hải Thạch – Mộc Tinh, they could not know what was happening under the sea.

There was an incident while they were drilling Mộc Tinh 2X Well, the deepest well where the temperature is much higher than other wells.

The cement did not set normally like the previous wells when it was pumped into the well, creating holes. The drillers turned to experts of the world’s top companies, but could not solve the problem because no one had ever encountered anything similar. The Vietnamese drilling team had to do their own research and found a solution which was to use an additive called polymer mixed with cement to make sure it set.

Another problem was losing fluid while drilling, making it compulsory to improve drilling fluid quality.

In the past, BP used water-based drilling fluids and encountered problems. The lesson for BIENDONG POC and PV Drilling to study was the application of other drilling fluids, specifically synthetic oil.

But this solution required some environmental standards before the fluid is discharged into the sea. Therefore, the project management unit and the drilling fluid supplying unit must ask for approval from the Ministry of Natural Resources and Environment to get a certificate.

Since the fluid was replaced, it was not only suitable for mining conditions, which makes the drilling process much more convenient, but also helps the project save money as it is cheaper than the old fluid.

These are two of many typical technical innovations that Vietnamese engineers have studied and implemented to overcome difficulties while working on the project. Many of these innovations have contributed to the success of the East Sea 01 today. It demonstrates the internal strength, intelligence and bravery of Vietnamese petroleum workers.

Talking about conditions that make PV DRILLING V and drilling campaign of the East Sea 01 successful, Thọ said: “It was made by the Vietnamese.”

It was the determination, internal power of Vietnamese people.

Thọ added: “We, including the BIENDONG POC constructors, have made our own discoveries, and mapped out requirements to upgrade the equipment to suit the harsh drilling conditions. All are calculated and studied by Vietnamese people.

“If we did not learn by ourselves, did not make technical requirements, the rig constructors would not have known what to do. It is not difficult to build a TAD rig, but to build a rig like PV DRILLING V, we had to design it.

A new generation of drilling experts and engineers who are brave and experienced to meet high technical and scientific requirements of PV Drilling and Vietnamese petroleum sector has been trained during five years of drilling East Sea Project 01. In the near future, the team will conduct drilling for other projects, which are just as difficult and complex as Hải Thạch – Mộc Tinh.

When the old oil and gas fields near the shore were exploited for many years and the output declined, PVN was forced to explore and exploit new fields located in farther and deeper waters with more severe conditions.

That was also the time when the drilling team of PV Drilling or PVD Deepwater in particular had the opportunity to promote their internal strength and bravery. It represents PV Drilling’s development strategy: “Drilling deeper – Reaching farther”. — VNS 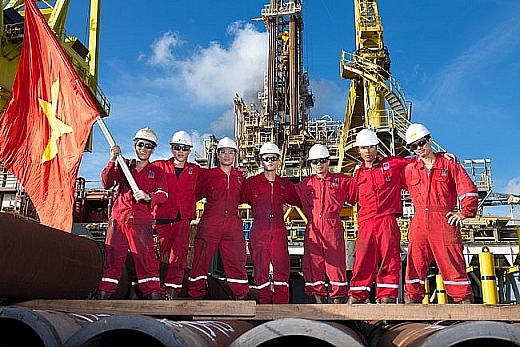 Staff working on the platform all want to contribute to asserting the sovereignty of the sea and islands of Việt Nam.