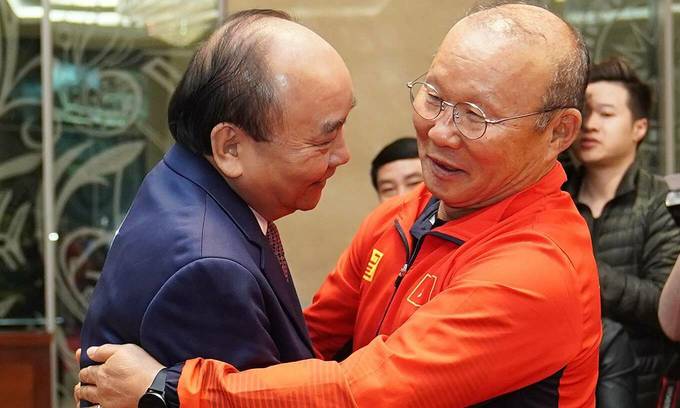 Prime Minister Nguyen Xuan Phuc (L) hugs coach Park Hang-seo at the government office in Hanoi as he welcomes back the men and women’s football teams from the 30th SEA Games, December 11, 2019. Photo by VnExpress/Gia Chinh.

“Vietnam’s football teams were victorious in this SEA Games because we had excellent coaches, talented and determined players who aspired to win, and fans who supported the teams from every part of the country,” Phuc said at a dinner reception held in Hanoi for the victorious men’s and women’s teams.

Both teams showed their fighting spirit throughout the competition despite injuries and a tight match schedule with few rest days, the PM said.

Phuc, an avid football fan who’s become a familiar presence when the national team plays at home, said the Vietnamese players should continue to advance football development in the country. He mentioned in particular the 2020 AFC U-23 Championship and the World Cup qualification matches.

Hundreds of Vietnamese fans gathered at the Noi Bai International Airport Wednesday afternoon to welcome back the 242 athletes who represented their country at the 30th SEA Games hosted by the Philippines.

The two football gold medals added to the nation’s total 288 medals at the games, including 98 golds, placing Vietnam  second on the tally board behind the Philippines.