Da Vien, located in the middle of Huong (Perfume) River in central Vietnam, is more than 100,000 square meters wide. Over the last two weeks, the birds have begun to crowd the island at around 5 p.m. every day, delighting both locals and tourists.

Nguyen Van Quang, 37, who lives five minutes away from the island, said that early in the morning, the birds fly around the river and go to the fields around Hue, looking for food. In the evening, they get back to the island.

“A few years ago, at this time of the year many birds also flew back to stay here overnight. This year, more storks have come.”

Nguyen Dai Anh Tuan, deputy director of Thua Thien-Hue’s Department of Agriculture and Rural Development and head of the provincial Department of Forest Protection, said that in the cold rainy season, many storks from countries like South Korea and Japan migrated to fields in Vietnam to feed.

In Hue, more storks appear in the rice fields during the rainy season to catch fish and shrimp, and rest in the forest by the river at night. “Da Vien Island has dense vegetation and because of little human influence, some flocks choose the area to build their nests and live there permanently,” he said.

Dr Le Manh Hung with the Institute of Ecology and Biological Resources said that at this time of the year flocks of birds from the north of Vietnam often migrate to the south to avoid the cold.

“Throughout the journey, the birds will swoop down to fields where crops are being sown to find food and look for nearby woods to sleep through the night.

“Many migratory storks residing in Da Vien and the rivers and lagoons in Hue are white storks. They are usually accompanied by the cattle egret,” Hung added.

Authorities have said they want to turn Hue into an urban city with parks that are a safe haven for birds and animals.

Hue was the capital of Vietnam under the Nguyen Dynasty, the country’s last royal family which ruled from 1802 to 1945. The town is a leading tourist destination, attracting 4.8 million visitors last year, up 11 percent year-on-year, 2.18 million of them foreigners. 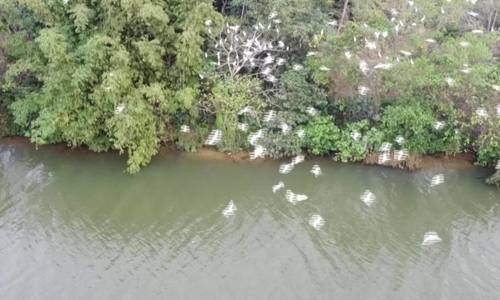