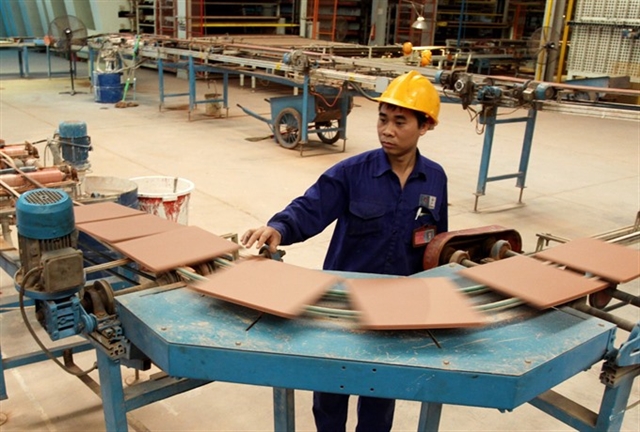 A worker checks the quality of Cotto floor tiles at Viglacera Halong JSC in the northern province of Quảng Ninh. Shares of Viglacera Corporation JSC (VGC) hit the daily limit rise of 7 per cent on Friday. — VNA/VNS Photo Thế Duyệt

HÀ NỘI — Vietnamese shares inched upwards up on Friday, driven by technology, construction materials, and mining and energy sectors while market sentiment was clouded by worries about the increase of virus infection cases and US-China tension.

The benchmark VN-Index on the Hồ Chí Minh Stock Exchange rose 0.17 per cent to end at 841.46 points, extending its rally for a fifth day with total growth of nearly 5.40 per cent.

Mid-cap and small-cap stocks bounced back in the afternoon session to drive the market up, with the two indices ending up 0.42 per cent and 0.80 per cent, respectively.

The building materials, mining and energy, and technology industry indices grew by 0.29-0.65 per cent, according to vietstock.vn.

Those stocks surged between 0.6 per cent and 7 per cent.

The northern market index lost 0.59 per cent on Thursday.

The HNX-Index gained a total of 4.9 per cent this week.

The strong gains of mid-cap and small-cap stocks helped balance poor market sentiment as investors worried about tension between the US and China, MB Securities Co (MBS) said in its daily report.

The number of coronavirus infection cases in Việt Nam increased on Friday and weighed on the market sentiment, MBS said.

As of 6pm on Friday, the total number of virus cases in Việt Nam was 784 and 10 patients had died.

The market had been more positive in recent days when investors became more optimistic about the possibility the disease would be soon controlled, Thành Công Securities Co (TCSC) said in a note.

The VN-Index was heading to 850-860 points but some struggles would appear, TCSC said. — VNS

HCM City police station bomber gets 24 years in jail for...