In its list of the world’s most beautiful cathedrals released Friday, the Saigon cathedral, aka Notre Dame Cathedral Basilica of Saigon, is the only representative from Southeast Asia.

The majestic cathedral in the heart of Ho Chi Minh City, Vietnam’s southern metropolis, “was modeled on the Notre-Dame Cathedral in Paris, and materials for its construction were shipped from France,” the U.S. news site noted.

Construction of the cathedral was completed in 1880 under the supervision of famous architect Bourard. It originally provided religious services for French colonists in the 19th and 20th centuries. The cathedral has two bell towers that are 58 meters high.

Located in a tourist precinct that includes the historic Central Post Office in District 1, the 140-year-old cathedral is popular among foreign and local visitors, especially during holiday seasons.

However, it has closed its door to tourists for a long time to carry out extensive renovation work.

Financed by the Ho Chi Minh City Archdiocese, the restoration project, which would cost an estimated VND140 billion ($6 million), is scheduled to be completed in 2023.

European cathedrals including France’s Reims Cathedral, Italy’s Milan Cathedral, the Cathedral of the Dormition in Russia, the Mosque-Cathedral of Cordoba in Spain and the St. Paul’s Cathedral in the U.K. dominated the list

The Cathedral of St. John the Divine in New York City, the largest in the world at 121,000 square feet, is also on the list.

“Though the only requirement for a church to become a cathedral is the presence of seat for a resident bishop, many cathedrals have far grander architecture than traditional churches,” the Business Insider said. 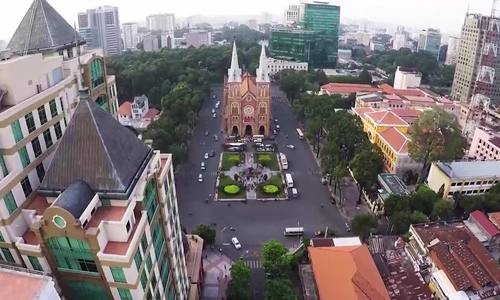