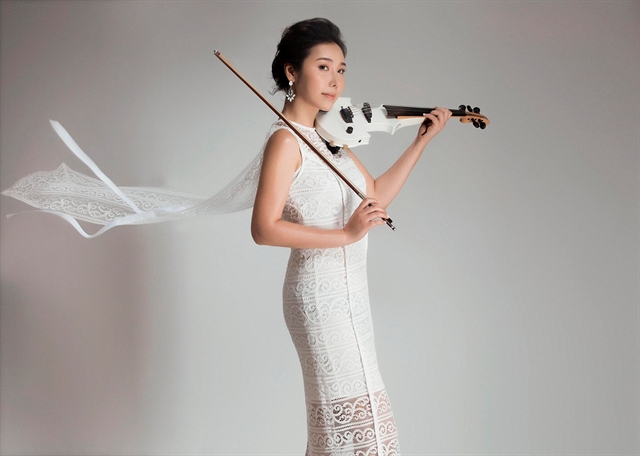 HCM CITY — HCM City-based South Korean violist Jmi Ko has recently released a music video online after its premiere was cancelled due to the COVID-19 pandemic, aiming to spread optimism during the virus outbreak.

“Music video Heal the World by Jmi Ko and the talented kids with the hope that through this music video, everyone will temporarily forget the worry about this pandemic and always find the source of energy positive amount to heal the world together,” the violist wrote on her Facebook page.

The video was made to raise funds for Heartbeat Vietnam to support families of congenital heart defects children after the COVID-19 pandemic and all proceeds will be used to support life-saving heart surgeries for children in need.

Lăng Cô Bay in the central province of Thừa Thiên-Huế, listed as one of the world’s most beautiful bays in 2009 by the World Bays Club, was chosen as the backdrop for Heal The World.

To capture the best moments for the video, Ko revealed that she and other actors and musicians had to stand in the sun in 40oC heat for 12 hours.

“The footage was taken from 4am to 4pm in two days in the intense sunlight that is typical of central Việt Nam. However, all the crew, from the artists to the student actors, were trying to complete the scenes without asking for a break. I, therefore, hope that the audience can feel our positive and optimistic spirit on watching Heal the World so that we could heal and unite the world together,” the violist told Thanh Niên (Young People) newspaper.

Ko has become familiar to Vietnamese audiences through the violin version of Xin Chào Việt Nam (Hello Việt Nam), which has received nearly five million views on YouTube since its release in 2016.

In her return to music after a period of absence, she has launched a musical product entitled Heal the World which kicks off a musical tourism promotion project she has been working on since she moved to Việt Nam eight years ago.

“It is impossible to describe the beauty of this country and its people. I have fallen in love with Việt Nam every day. Our production team has spent a lot of time travelling through Việt Nam and captured its beauty to show you all. Let’s hope we can travel to these beautiful places again soon when COVID-19 is over. Let’s learn how to protect nature a better way,” said Ko.

The violinist said that she has been touched and felt more love for Việt Nam witnessing teams of Vietnamese doctors and nurses that have made great efforts to save patients through the global pandemic.

With 30 years of experience of performance, Ko decided to embark the journey of inspiring and promoting Vietnamese music and nature to international friends last year.

She is currently working as a music teacher at HCM City. — VNS

HCM City police station bomber gets 24 years in jail for...