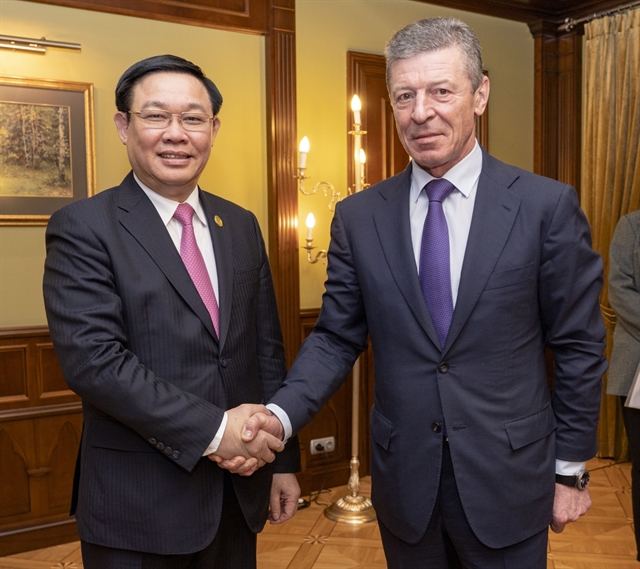 MOSCOW — The Russian Government always supports its businesses in increasing cooperation with Việt Nam, especially in the fields of oil and gas and energy, according to Russian Deputy Prime Minister Dmitry Kozak.

He said during discussions with his Vietnamese counterpart Vương Đình Huệ in Moscow on Tuesday, held in the framework of an official visit by Vietnamese National Assembly Chairwoman Nguyễn Thị Kim Ngân.

The two Deputy PMs shared the assessment that bilateral economic, trade and investment ties have recorded positive development recently, with two-way trade value reaching US$4.5 billion in 2018 and $3.77 billion in the first 10 months this year, and new investment projects launched.

In the context of multiple fluctuations in the world, the two sides agreed to coordinate to remove non-tariff barriers for each other’s goods, especially for agricultural and fishery products, with a view to optimising their potential and advantages created by the Việt Nam-EAEU free trade agreement.

Deputy PM Huệ stressed that Việt Nam attaches importance to the partnership with Russia in oil and gas and energy, which are important pillars of the Việt Nam-Russia comprehensive strategic partnership.

The two sides agreed to work to remove obstacles that are hindering their joint projects in Việt Nam, and expanding the scale of joint projects in energy and oil and gas while improving the operational efficiency of joint ventures Vietsovpetro and Rusvietpetro. They pledged to facilitate the participation of oil and gas enterprises of both countries in new schemes in oil and gas exploration and exploitation, and gas-fuelled electricity generation.

The same day, Deputy PM Huệ meet with executives of Gazprom, Zarunezhneft and Power Machines. He used the occasion to stress how the Vietnamese Government always welcomes and creates favourable conditions for Russian firms to expand oil and gas exploration and exploitation activities in Việt Nam’s continental shelf as well as in other fields. — VNS