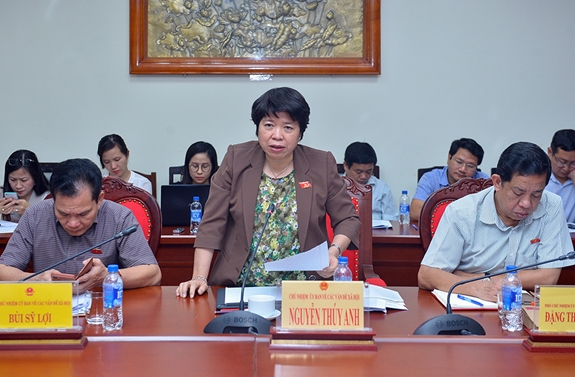 HÀ NỘI – Revisions to the Law on Entry, Exit, Transit and Residence of Foreigners in Việt Nam were debated yesterday by the National Assembly Committee for National Defence and Security.
The revisions would aim to create more favourable conditions for foreigners in Việt Nam and promote economic development.
Regulations on visa exemptions for foreigners have been causing difficulties because they only allowed foreigners to return to the country 30 days after exiting.
Amending and supplementing some articles in the law would contribute to completing the legal system on immigration while meeting the requirements of administrative procedural reform and ensuring national defence and security, the meeting heard.
The numbers of foreign tourists entering Việt Nam by sea had been increasing in recent years.
A large number of them were arriving in Việt Nam as part of military exchanges conducted by the Vietnamese Navy with other countries.
This was why visa regulations needed amending, the conference heard.
In order to facilitate foreign entries to Việt Nam and enhance hi-tech applications at immigration control, the officials discussed the use of automatic control gates.
The Government has asked the Ministry of Public Security and other relevant ministries to address this issue.
During yesterday’s meeting, committee members agreed with the necessity of the amendments to reduce these shortcomings and helped legalise the Party’s foreign policies, ensuring compliance with trade agreements Việt Nam had signed and meeting the requirements of international integration.
The committee agreed on a new regulation regarding changing visa purposes (tourism, business etc) in specific cases but with strict conditions.
The regulation would help foreigners who were eligible to stay in Việt Nam to change their visa purposes to look for jobs and investment opportunities in the country.
The regulation would also help save costs for foreigners trying to return, the committee said.
The Government also planned to decide on a list of countries whose citizens were eligible for e-visas and a list of border gates where they were accepted.
The committee agreed with amendments to re-entry regulations for foreigners with visa exemptions.
This would mean foreigners would not need to wait 30 days before returning to Việt Nam.
Tobacco harm control
On the same day, the NA Committee for Social Affairs spent time evaluating a Government report on the use and management of a fund designed to prevent and control the harm caused by tobacco.
The Ministry of Health said the fund had been used following the Law on the Prevention and Control of Tobacco Harm.
From 2017 to 2019, the fund had been used to support 99 entities and called on ministries, sectors, provincial and city authorities and hospitals to take part in activities to control tobacco.
A control network had also been set up across the country, and all cities and provinces along with 20 ministries had established steering committees on the issue.
As a result, the rate of male smokers had dropped dramatically in the provinces of Quảng Ninh, Bắc Giang, Lào Cai, Sơn La, Thái Bình, Yên Bái and Lạng Sơn.
The rate of passive smoking at work, in universities and colleges, and on public transport had also fallen by 13 per cent, 16 per cent and 15 per cent, respectively, the report said.
The committee appreciated the Government’s efforts to implement the Law on Prevention and Control of Tobacco Harm, and agreed the report had shown good results of the use and management of the fund.
The fund had played a key role in helping organisations and authorities to carry out activities on tobacco harm control.
However, the committee pointed out some shortcomings affecting the fund’s operation.
Smoking bans in workplaces, hospitals, schools and other public areas had not been effective, and the actions taken by steering committees had not had the desired results.
The committee asked the Government to take measures to improve the quality and efficiency of the fund’s management board and promote plans for tobacco harm control for the next two years. – VNS