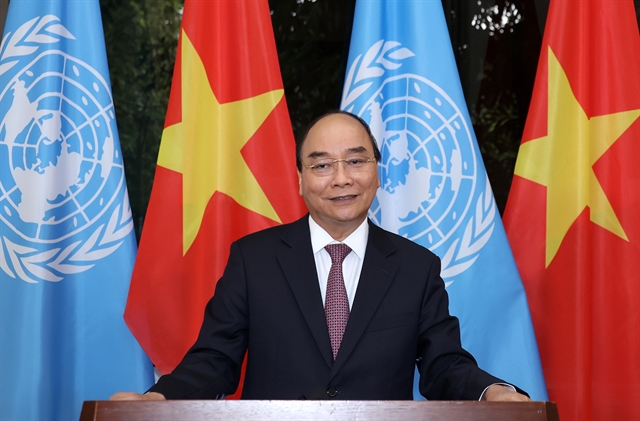 Prime Minister Nguyễn Xuân Phúc sent a message to the United Nations High-Level Meeting marking the 75th anniversary of the UN in New York on September 21, as part of the 75th session of the UN General Assembly. —VNA/VNS Photo Thống Nhất

HÀ NỘI — Prime Minister Nguyễn Xuân Phúc sent a message to the United Nations (UN) High-Level Meeting marking the 75th anniversary of the UN in New York on Monday (local time), as part of the 75th session of the UN General Assembly.

The meeting drew 137 senior state leaders and 33 ministers of UN member countries. Due to COVID-19 pandemic, leaders of states sent video recordings to air at the meeting.

Recalling the great achievements the UN has gained over the past 75 years, the PM said they would not have been possible without the fundamental principles of the UN Charter and the UN itself as the centre for harmonising the actions of nations.

Noting that because the world is facing unprecedented challenges, “The COVID-19 pandemic, together with instabilities, conflicts, great power competition, power politics, and climate change are threatening the sustainable peace and development of nations,” Vietnamese PM underlined the need to work together in solidarity and strengthen multilateralism with the UN at its core with the strict implementation of the UN Charter and international law, along with respect for independence, sovereignty, and territorial integrity of the states.

The people must be at the heart of all efforts for development so that no one is left behind, the leader stressed.

“Today, our country, with much confidence, is enjoying vibrant growth, and pursuing extensive economic restructuring and active international integration, participating as a responsible member at numerous multilateral forums, especially the United Nations. We are exerting all efforts for the goal of a prosperous people and a strong nation that enjoys equality, democracy and the fruits of civilisation,” he continued.

Thanks to the collaboration with all international partners and with our own efforts, Việt Nam had managed to basically contain the COVID-19, and a strong rebound of the economy was expected to follow, he said.

The PM used the occasion to extend to other member states the gratitude for entrusting Việt Nam with a non-permanent membership at the UN Security Council for the 2020-2021 tenure.

“As the Chair of ASEAN in 2020, Việt Nam is working closely with other ASEAN members to build an ASEAN Community of unity, resilience and prosperity,” he stated.

“Vietnamese people are determined to work alongside other nations around the world to safeguard peace and realise the UN Sustainable Development Goals,” he declared, stressing that the Vietnamese flag would be flying at even more UN Peacekeeping missions in the future.

The Government leader expressed his belief that with strong determination and joint actions, a brighter future for all would be built. — VNS