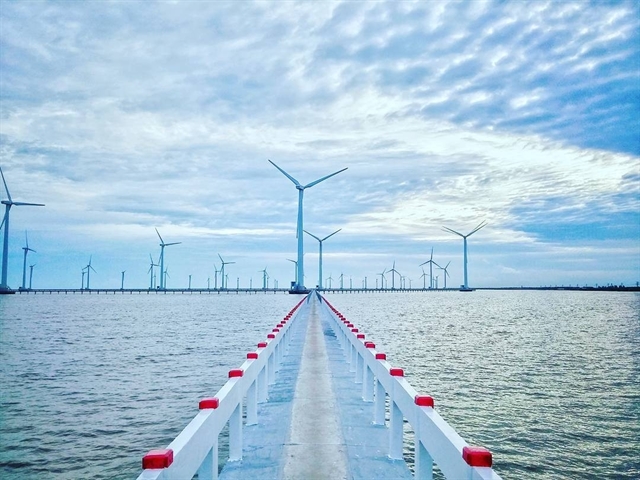 Together with Vietsovpetro, the PVC-MS is the main contractor for fabricating and installing offshore Kê Gà wind power project in Bình Thuận Province. — Photo courtesy of PVN

HÀ NỘI — After more than 50 years of developing the oil and gas industry, almost all  projects have recognised the contributions of Petroleum Equipment Assembly and Metal Structure JSC (PVC-MS). From the first oil and gas base in Vũng Tàu to self-lifting rigs, PVC-MS workers have all made contributions.

Those working in petroleum sector and petroleum project managers in Việt Nam are familiar with the PVC-MS. To start each project, the first task is to invite experts and workers specilising in mechanical engineering, machine installation and especially steel and metal structure because oil and gas constructions have extremely high requirements on construction and manufacturing techniques, from carrying capacity, compressive strength, calculation of metal expansion to resistance to damage from severe environment.

The PVC-MS was established in October 1983 aiming at developing support services for the oil and gas industry, including construction and installation of offshore petroleum works. The PVC-MS used to be the Steel Structure Enterprise, initially tasked with applying Soviet technology in manufacturing and assembling drilling rig bases. From March 1984, when the Construction Department (now the Marine Construction Enterprise) of Vietsovpetro started to manufacture the base of MSP1 rig, the first rig in Việt Nam, 15 officials and workers of the Steel Structure Enterprise were appointed to participate in the project to study the manufacturing technology drilling rigs.

Over the past decades, units of PetroVietnam in general and PVC-MS in particular have taken on two tasks which are to receive technology, to learn how to operate and make improvements to manufacture industrial products including oil and gas exploration, exploitation and transportation devices, self-lifting rigs. They have gradually mastered a lot of specialised mechanical engineering fields.

After 36 years since its establishment, PVC-MS has made memorable milestones, including historical achievements associated with PVC-MS brand. All have contributed to the development of Việt Nam’s oil and gas industry.

The PVC-MS built the base of Việt Nam’s first rig, followed by the successful fabrication of the “junction” system linking space of tubular steel structures, laying a foundation for the complete manufacture of rig base in Việt Nam.

The PVC-MS also constructed DK1 rig for scientific research and marine services on the Trường Sa (Spratly) Archipelago. For the first time, it co-operated with Vietsovpetro Joint Venture Enterprise to provide rig manufacturing services for foreign partners, which kicked off international co-operation of PVC-MS with other partners. Since then, the PVC-MS has completed a lot of outstanding achievements.

With achievements and striving efforts of generations of leaders and workers, the PVC-MS was honored to be awarded many noble awards such as the first, second and third class labour medals granted by the Party and the Government; second, certificates of merit from the Prime Minister.

The PVC-MS not only acquires and masters the technology of manufacturing and installing oil and gas projects, but also constantly improves techniques and practical applications to reduce costs and improve efficiency. This is to affirm the reputation of an international contractor in the field of oil and gas construction.

Recently, the Thăng Long Wind project – an offshore wind power project worth about US$3 billion located at the offshore area of ​​Kê Gà Cape, Bình Thuận Province, has selected Vietsovpetro and the PVS-MS to be the main contractors responsible for the project’s construction onshore and offshore.

With the imprints from the DK1 rig, the drilling rigs at Sư Tử Nâu, Sư Tử Vàng, Thiên Ưng fields, the PVC-MS is rated as one of the trustworthy contractors in the field.

While the Vietsovpetro is the “Big Brother” of Việt Nam’s oil and gas industry with a long tradition and experience in oil, gas exploration and production, the PVC-MS is one of the pioneering and major factors in designing and assembling rig bases, rigs and brackets, rigs and metal-structured systems of offshore constructions. — VNS