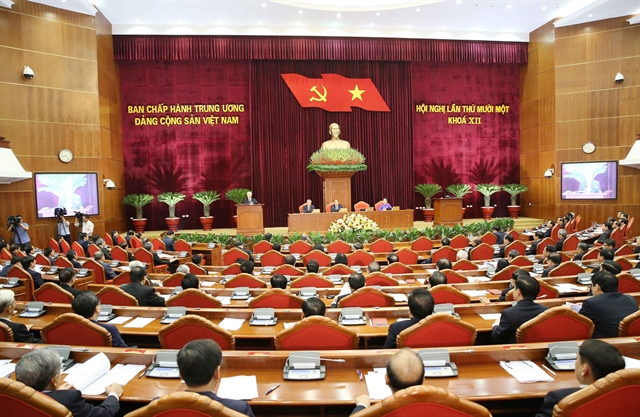 HÀ NỘI — The 11th plenum of the Party Central Committee, 12th tenure, opened in Hà Nội on Monday under the chair of Party General Secretary and President Nguyễn Phú Trọng.

Under its working programme, the conference will last until Sunday.

The Party Central Committee will discuss draft documents to be submitted to the 13th National Party Congress, including the Political Report and the report on the 10-year implementation of the Platform on national construction in the period of transition to socialism (revised and supplemented in 2011) or Platform 2011 in short.

Another important content of the plenum is the socio-economic and budgetary performance in 2019-20.

At the opening, Party General Secretary and President Trọng noted that 2020 is the last year of the 12th tenure, when Party organisations at all levels will hold congresses in preparation for the 13th National Congress of the Party.

The 11th session of the 12th Party Central Committee is important in that it will provide leadership and instruction for the implementation of tasks in 2019-20 and the organisation of all-level Party congresses.

The Party leader required the Party Central Committee members and other participants to discuss the draft reports thoroughly and pool their ideas to perfect the documents and make decisions on important issues on the agenda. — VNS