HÀ NỘI — A new conservation designation of the Convention on Biological Diversity (CBD) promises more opportunities for Việt Nam to boost conservation work in the country, experts have said.

The CBD, to which Việt Nam is a party, has recently agreed a new conservation designation that complements protected areas and this is an opportunity for Việt Nam to extend and connect the country’s conserved areas by identifying and legally recognising “other effective area-based conservation measures or OECMs,” according to Jake Brunner, head of the IUCN, International Union for Conservation of Nature, Indo-Burma Group.

“Việt Nam is home to several large agricultural dominated landscapes that include areas of high biodiversity value and/or are the target of restoration to reestablish natural ecosystem functions for climate change and biodiversity benefits. Within these landscapes there are opportunities to recognise OECMs,” Brunner said. 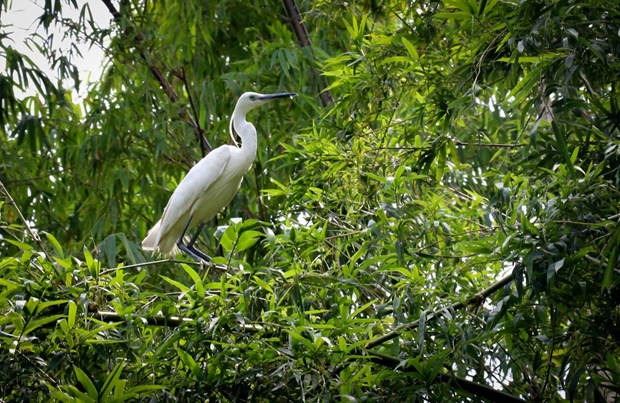 In a statement released last week on the website of the IUCN, the expert gave some examples of conservation areas that the country should be focusing on.

In the Mekong Delta, a key Government aim is to de-intensify rice production to reconnect the Mekong’s flood plain and restore ecosystem functions.

“This opens up the possibility of transitioning hundreds of thousands of hectares in the upper delta out of the third or even second rice crop into higher value flood-friendly livelihoods. As well as increasing flood and drought resilience, this will restore capture fisheries and aquatic and agro-biodiversity. Parts of these restored areas may be recognised as OECMs,” added Brunner.

In Hà Nội, Brunner pointed out an opportunity to convert the southern tip of Bãi Giữa Sông Hồng, the 300-hectare island in the middle of the Red River, into one of the city’s few green spaces. Some 300 species of birds have been recorded there.

“OECMs also offer an opportunity to recognise contributions to biodiversity conservation by businesses and communities by improving the efficiency of the management of the land they are allowed to use,” according to Tú.

The expert said Việt Nam has OECMs, such as “no-enter areas”; sacred areas, military zones, war ruins, and other “prohibited” areas (dependent); areas preserved by low-impact use, watershed protection areas, and wetlands related to ecosystem services (secondary); private land areas for conservation as the first purpose, and areas which cannot or don’t want to be registered as protected areas (primary).

The CBD, first being opened for signatures at the Earth Summit in Rio de Janeiro in June 1992 and entered into force in December 1993, is a multilateral treaty, often seen as the key document regarding sustainable development with three main goals, including: the conservation of biological diversity (or biodiversity); the sustainable use of its components; and the fair and equitable sharing of benefits arising from genetic resources.

Its objective is to develop national strategies for the conservation and sustainable use of biological diversity.

Parties to the CBD adopted the OECM as well as its guiding principles, common characteristics and criteria for identification in November 2018.

In 2014, Prime Minister’s Decision 1976 proposed expanding coverage to 2.4 million hectares, or about 7 per cent of Việt Nam’s land area, by 2020 and today coverage has almost reached this target.

Nevertheless, there is little prospect of Việt Nam legally protecting 17 per cent of its land area by 2020 as defined by CBD Target 11.

One reason for the slow-down in expanding the protected area network over the last 20 years is competition over land and water in a rapidly developing country of 96 million.

Another factor is the limited funding available for protected area management.  With resources stretched thin and management effectiveness already low, there is little appetite to add to the protected area coverage, according to the report. — VNS

Heavy rains wreak havoc up and down nation