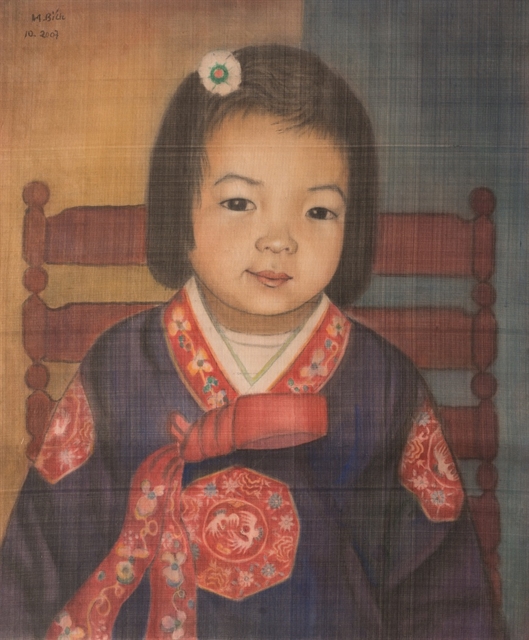 The portrait of a Korean girl by painter Mông Bích. — Photo courtesy of the organisers

Đi Giữa Hai Thế Kỷ (Between Two Centuries) is the first solo exhibition of the veteran painter who has spent more than 60 years creating art.

Visitors to the exhibition can see silk paintings with watercolour, sketches that have established Bích’s reputation and original style and listen to the stories behind each artwork recorded in voice recordings made by the painter.

Some highlights include the portraits of an old beggar Bích encountered on the street, her late respectable teacher, master painter Trần Văn Cẩn, and the scenery of a Chăm ethnic village in the sunset.

“My paintings are not favoured by many customers. I paint portraits of rural old ladies or old lady beggars, who would like them? But that might have been fortunate. If I had kept chasing after money or high living standards, I might have forgotten art,” Bích said.

In addition, a documentary showcasing Bích’s life in a peaceful village will be shown in the exhibition space.

Bích was born in Hà Nội in 1931. She graduated from Hà Nội College of Fine Arts (now the Việt Nam University of Fine Arts) in 1970 and was a student of many celebrated Vietnamese painters like Trần Văn Cẩn, Nguyễn Đỗ Cung and Hoàng Lập Ngôn who inspired her with not only knowledge but also love for painting.

Painter Cẩn once commented that Bích’s paintings were created with instinct and emotions. Meanwhile, Prof Nora A Taylor from the Chicago Fine Arts Academy said Bích was the embodiment of changes of Việt Nam’s art and history in the past century.

19 couples get married together in Thái Nguyên