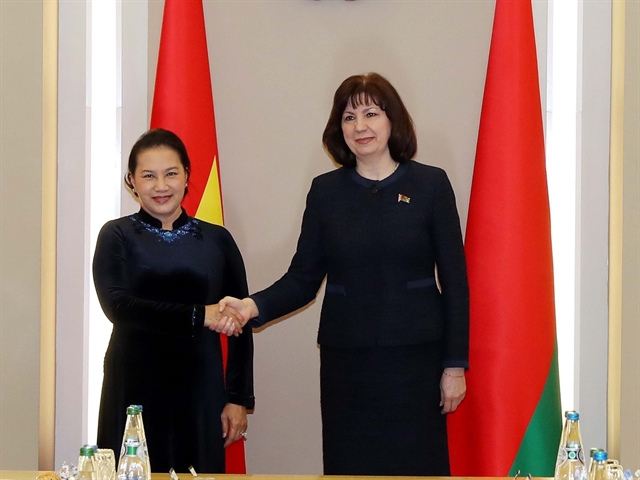 MINSK — Việt Nam and Belarus should work together to lift two-way trade to US$500 million to match both sides’ potential and desire, said National Assembly Chairwoman Nguyễn Thị Kim Ngân during talks with Chairwoman of the Council of the National Assembly of Belarus Natalya Kochanova in Minsk on Thursday (local time).

Ngân is on her first official visit to Belarus from December 12 – 14.

The Chairwoman of the Council of the National Assembly of Belarus said the level of mutual trade between the two nations does not correspond to their potential, so the two sides need to further bolster cooperation in this area, saying the Belarusian NA will do it best to reinforce the ties between the two parliaments and countries.

The Vietnamese top legislator said Việt Nam always treasures the friendly relations with Belarus, which date back to the times of the Soviet Union.

Sharing Kochanova’s view on the modest bilateral economic and trade cooperation, Ngân said the two nations must strive to lift the two-way trade to $500 million in the future. She suggested the two sides give priority to areas where Việt Nam’s advantages match Belarus’ demands, such as textile and garment, wood, fishery, pharmaceuticals, computers and rice, and boost trade of agricultural products that can complement each other.

The two sides should also seek new opportunities for cooperation, make the most of the Vietnam-Eurasian Economic Union (EAEU) Free Trade Agreement and promote the FTA among their business communities, she added.

She spoke highly of Belarus as a traditional and trustworthy partner of Việt Nam in defence and security, proposing the two sides continue maintaining effective cooperation, delegation exchanges and implementation of the Việt Nam-Belarus military-technical cooperation for 2016-20, and complete the legal framework for partnership in security.

She went on to emphasise Việt Nam’s consistent stance on the East Sea that all disputes must be settled by peaceful measures, in line with international law, including the UN Charter and the 1982 UN Convention on the Law of the Sea (UNCLOS). All concerned parties must fully and effectively implement the Declaration on Conduct of the Parties in the East Sea (DOC) and soon conclude the Code of Conduct in the East Sea (COC), she said.

Both leaders appreciated the operation of the Việt Nam-Belarus inter-governmental committee on economics, trade, science and technology.

Belarus sees Việt Nam as a strategic partner and a springboard for increasing its economic presence in the Southeast Asia, Kochanova said.

Both sides agreed that they need to help joint ventures of the two countries gain broader access to Asian and European markets and that a Belarus Day will be held in Việt Nam in 2021.

Kochanova affirmed the Belarusian NA attaches importance to ties with the Vietnamese NA, adding that a friendship parliamentarians’ group with Việt Nam will be set up in the future.

To further enhance ties between the two legislatures, the two leaders agreed to increase exchanges of high-level delegations, committees and friendly parliamentarians’ groups to boost mutual understanding and trust; continue effectively implementing the two sides’ agreement signed in April 2009 and promoting close coordination at multilateral forums; and jointly review and supervise the enforcement of agreements reached by the two countries’ governments and ministries.

Meeting with Chairman of the House of Representatives

The same day, Chairwoman Ngân held talks with Chairman of the House of Representatives of the National Assembly of Belarus Vladimir Andreichenko. 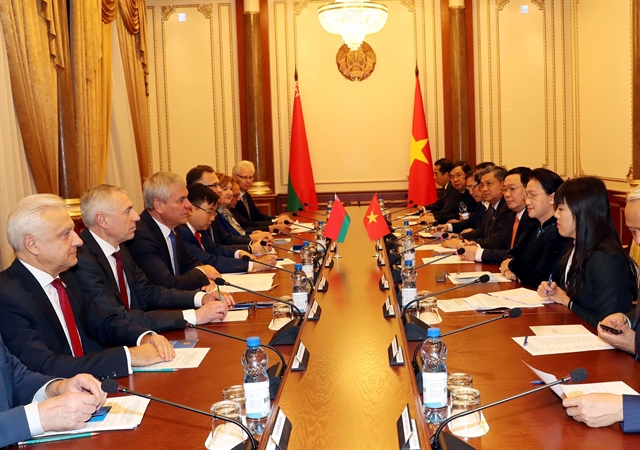 Agreeing with NA Chairwoman Ngân’s suggestion to set up joint ventures between businesses of both sides, Vladimir Andreichenko said that Belarus will accelerate work to establish tea and coffee processing plants in Việt Nam so that the products will suit the taste of Belarusian consumers.

She suggested both sides maintain personnel training courses, and exchange information about the national security situation in each nation, including the fight against organised crimes, transnational crimes, high-tech crimes, and illegal immigration, among others.

She stressed the sound cooperative ties between the Vietnamese NA and the Belarusian House of Representatives in the past, recommending both sides maintain the exchange of high-level delegations, share experience in legislative work, and closely coordinate at multilateral forums to discuss issues of mutual concern.

Andreichenko said as there is huge room for both nations to develop economic and trade cooperation, the two parliaments should play a more proactive role to support the bilateral collaboration.

Together with existing cooperative mechanisms, both parliaments should work on new initiatives to enhance cooperation, he said, competent committees of the two National Assemblies need to join efforts to step up cultural exchange between the two countries.

He also stressed the necessity to promote cooperation at the local level, hoping the draft plan on Hà Nội-Minsk collaboration will be inked soon.

NA Chairwoman Ngân met Belarusian President Alexander Lukashenko the same day, during which they discussed the partnership between Viêt Nam and Belarus across spheres. 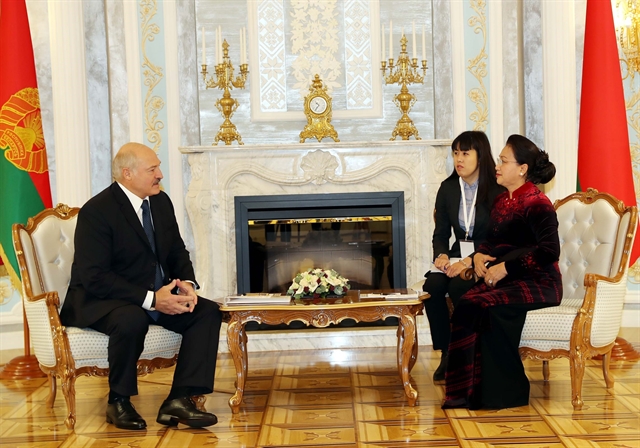 Belarusian President Lukashenko highlighted the fruitful bilateral cooperation in politics, economy, national defence and security, and education, with exchanges of visits and meetings by leaders, including those of legislative bodies.

Host and guest shared the views that two-way trade still remain modest, standing at only $92.2 million last year and $41.1 million in the first half of this year.

They urged promoting the economic and trade collaboration to match the bilateral political ties, aiming to raise two-way trade revenue to $500 million as targeted by leaders of both sides.

Chairwoman Ngân expressed her hope that the two countries will continue to maintain the trustful and regular collaboration in national defence and security, culture, science-technology and tourism. — VNS