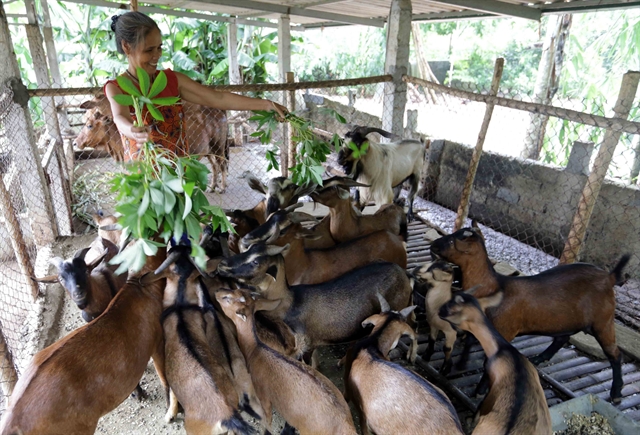 Thanks to a preferential loan for fresh-out-of-poverty households, Đinh Thị Xuyên, a Mường ethnic minority household in Yên Lãng Commune, Thanh Sơn District of the northern province Phú Thọ, has been raising a small herd of goats and cows, helping ensure that the family stays out of poverty. — VNA/VNS Photo Trần Việt

BẠC LIÊU — Multi-dimensional poverty standards should be adjusted to suit the current economic conditions of the country, an official of Ministry of Labour, Invalids and Social Affairs has said.
Speaking at a workshop in Bạc Liêu Province on Thursday, Phạm Minh Thu of the ministry’s Institute of Labour Science and Social Affairs proposed new multidimensional poverty standards and measures for the 2021-25 period.
The country’s Sustainable Poverty Programme applies multidimensional poverty standards from 2016 to 2020.
“Multi-dimensional measures should follow international multi-dimensional poverty standards in the next period,” she said.
The main causes of poverty are disadvantages related to natural conditions, physical and human capital, business risks, and other life upheavals.
In the 2016-2020 period, the national poverty rate is estimated to be around 5.23 per cent and the near-poverty rate at 4.59 per cent.
The northwestern mountainous region has the highest poverty rate, 4.63 times higher than the national poverty rate. It is followed by the northeastern mountainous region and the Tây Nguyên (Central Highlands) region.
The southeastern region has the lowest poverty rate, with less than 1 per cent.
Thu said that a national database should be created to unify all information related to the programme on multi-dimensional poverty standards.
“Localities should build poverty-reduction policies and integrate them into their socio-economic development plans, depending on each locality’s condition,” she said.
Communication activities should also be improved to raise public awareness about sustainable poverty-reduction goals, multi-dimensional standards, and the multi-dimensional poverty line.
Lò Thị Đức of the Việt Nam General Statistics Office’s Social and Environmental Statistics Department said that multidimensional measures should focus on education, healthcare, clean water and sanitation, better access to information, and social security services.
“Multi-dimensional poverty criteria, measurement and standards should be simple to identify and measure,” she said.
Vương Phương Nam, vice chairman of Bạc Liêu Province’s People’s Committee, said: “Many of the solutions applying multidimensional poverty standards are contributing to the province’s sustainable poverty reduction.”
Last year, the province spent VNĐ26.5 billion (US$1.14 million) to support 7,400 poor households, offering financial support, providing seedlings and breeding varieties, and instructing them in production models and livelihood diversification.
“Most households have escaped from poverty in a sustainable way,” Nam said.
The province also used VND1.5 billion (US$546,500) to offer a year of health insurance for people who escaped poverty to ensure that they remained in good health.
However, difficulties still exist in poverty reduction. Public awareness activities in some localities had not been effective, and job creation efforts needed improvement, he said.
In addition, some poor households relied on assistance from the Government instead of trying to emerge from poverty, Nam said. — VNS