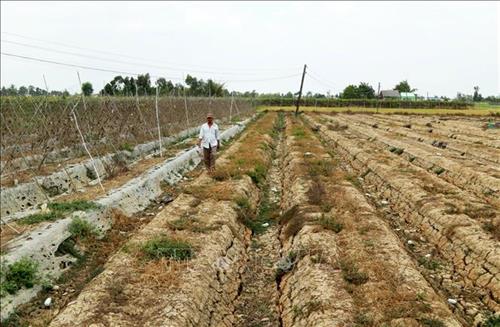 LONG AN — The drought-hit Mekong Delta province of Long An this year needs more fresh water, but can only supply about 50 per cent of demand from its 35 fresh water treatment plants and stations.

Nearly 736,000cu.m of water will be needed by 2030, according to the province’s planning on water supply.

Nearly 40 per cent of the province’s residents use fresh water, which is lower than the average national rate.

Authorities are concerned that the problem could become severe if they do not have solutions.

The province’s People’s Committee has instructed relevant agencies to adjust water supply to increase the usage rate among residents.

It has asked ministries for funds to build five sluices to prevent saltwater intrusion in the provinces of Long An and Tiền Giang, near Vàm Cỏ Tây River which supplies the Rạch Chanh Water Plant.

The province plans to build a reservoir to store fresh water in Thạnh Hóa District to supply water to nearly 12,000 households and for agricultural and industrial production.

In Cần Đước District’s Phước Tuy Commune, which faced water shortage in the dry season, residents now have access to fresh water after the commune’s People’s Committee allocated funds to upgrade water supply pipelines and presented water containers to people who live far from water wells. People have also been encouraged to use water economically.

The committee has called on enterprises to invest in water wells. The commune has nine wells that supply water to more than 2,000 households.

Long An is one of several Mekong Delta provinces severely affected by drought and saltwater intrusion every year. More than 8,000 households in the province lack fresh water.

In a similar situation, trees in mangrove forests in Mekong Delta Sóc Trăng Province’s Vĩnh Châu Town have died or are dying because of water shortage, according to the town’s Forest Protection Bureau.

The upgrading and construction of a sea dyke and a dam outside the mangrove forests to prevent saltwater intrusion has contributed to water shortage, according to the bureau.

After the Cửu Long (Mekong) Delta province built the dam at the Hồ Bể – Giồng Chùa Canal and rebuilt the Năm Đoàn Sluice in 2017, sea water was blocked from the forests.

The Giồng Chùa Canal, which provides water for the mangrove forests is silted, cannot transport sufficient water from the Mỹ Thanh River to supply the forests.

The town is opening sluice No16 to take water to save the dying mangrove trees, and will choose a suitable time to replace dead mangrove trees and recover the forests.

This is the first time that many trees in the mangrove forests in Vĩnh Châu Town have died because of water shortage, according to the bureau. — VNS

Co To tourism week launched to lure travellers after coronavirus