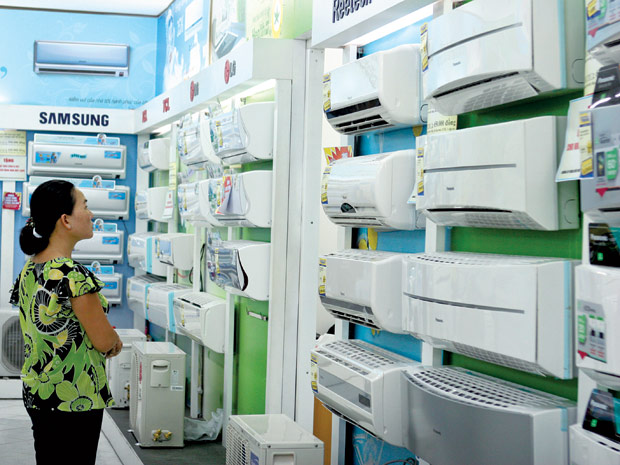 A customer shops for an air conditioner at a shopping mall in HCM City. – VNS Photo Văn Châu

Getting an air conditioner at a reasonable price and with useful features is not easy.

The most popular are 1-1.5 HP machines with inverters, timers and touch control from Toshiba, Daikin, LG, and Panasonic, which cost VNĐ8-12 million (US$345-515).

However, non-inverter products from certain brands like Kangaroo and Sunhouse cost only half those prices.

Lê Xuân Hoàn, general director of Kangaroo Việt Nam, said many products are high-priced because of the big brand tag attached to them, and their actual cost could be much lower.

Vietnamese brands may be cheap but they still come equipped with various technologies such as ion generation, dehumidification and others to combat bacteria and odour.

Even low-priced brands come with warranties and a promise to exchange for a new one if there is a technical defect in the first two years, according to Asanzo.

Hồ Kim Hồng, owner of an electronics store in HCM City’s Tân Bình District, said air conditioners with and without inverters both have advantages and disadvantages. Those with inverters cost double or triple, and repairs also cost much more due to the integration of many technologies, he said.

Nguyễn Văn Chung, a repairman, said those with inverters help save electricity.

Electronics stores in HCM City such as Nguyễn Kim and Thiên Hòa said demand for air conditioners has recently skyrocketed due to the hot weather.

Nguyễn Tuấn Bảo, sales director at Nguyễn Kim Electronics Centre, said that shops and supermarkets in HCM City usually offer discounts of only 10 or 15 per cent, but due to the very hot weather now they are offering discounts of 20-50 per cent on fans and air conditioners.

Demand is expected to continue rising in the coming months, and her sales could go up by 30-40 per cent, she said.

Both large stores and shops are offering promotions to boost sales.

Besides the discounts, they also have promotions. Most are offering free delivery and installation and payment in instalments with zero interest. – VNS