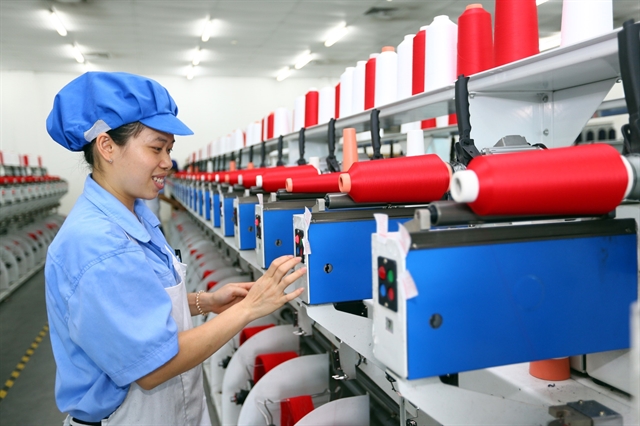 A production line of Jasan Vietnam Dyeing and Textiles, which is funded by a Chinese business, in the northern province of Hưng Yên’s Phố Nối B Textiles and Garment Industrial Park. — VNA/VNS Photo Danh Lam

HÀ NỘI — HCM City attracted about US$3.63 billion of foreign direct investment (FDI) capital in the first seven months of this year, marking a year-on-year increase of 15.2 per cent, according to the municipal People’s Committee.

Nearly $688.8 million came from 678 newly registered projects, up 26.9 per cent in value and 18.3 per cent in the number of projects from the same period last year.

In the period, 2,668 foreign investors bought shares and acquired stakes of domestic enterprises with total registered capital of $2.6 billion, 28.3 per cent and 16.7 per cent higher respectively than in the same period last year.

Meanwhile, HCM City granted business licences to 24,529 new domestic enterprises worth more than VND396 trillion ($17 billion), up 0.9 per cent and 25.7 per cent, respectively.

Up to 71,874 existing enterprises were allowed to add a combined total of more than VND160.4 trillion to their investment, up 2.2 per cent in number and 63 per cent in value.

The municipal People’s Committee said trade and investment promotion activities have contributed to accelerating the economic restructuring of the city and promoting exports of high value-added processed products. They have also helped increase the confidence of investors in the city’s business environment.

To further develop both domestic and FDI enterprises, municipal authorities will continue to simplify administrative procedures and remove investment barriers. Trade promotion activities and conferences will be arranged to promote co-operation between domestic and foreign investors.

According to Emerging Market Views, a news website based in New York, in the absence of clear evidence that the US-China trade dispute will soon end, it witnesses a new wave of investment from multinational companies shifting production from China to Việt Nam to avoid US taxes and seek new suppliers, allowing Việt Nam to reach an increase of 7.8 per cent in FDI in the first five months of this year, with a total value of about $7.3 billion.

Kevin Snowball, founder and CEO of PXP Vietnam Asset Management, told Emerging Market Views that as Việt Nam has opened door to integrate into the world economy deeply, expanding export markets through free trade agreements including the Comprehensive and Progressive Agreement for Trans-Pacific Partnership (CPTTP) and the European Union-Việt Nam Free Trade Agreement (EVFTA), these moves are expected to increase the country’s FDI by 10 per cent from $20 billion invested in this year.

CEO of VAM Vietnam Fund Management JSC Thiều Thị Nhật Lê said these FTAs will help Việt Nam’s FDI grow when FDI contributes about 70 per cent of its export revenue. Việt Nam’s FDI value increased to 38.7 per cent in the January-May period of this year,  mostly come from Chinese firms and the manufacturing and processing sectors.

“Given favourable conditions for investment in Vietnam including political stability, the skilled workforce at competitive labour cost, young population, strong domestic demand, being in several FTAs with large trade partners, I believe the FDI flow into the country will continue to be resilient in coming years,” Lê told Emerging Market Views.

“We have also seen foreign/multinational companies shifting their manufacturing from China to Việt Nam amidst escalating trade war between the US and China,” she added. — VNS

FLC Group’s shares of Bamboo Airways down by half