The capital city club only needed to win one match to take the trophy, but it was not a walk in the park playing away at SLNA’s Vinh Stadium.

With a thick, crowded defense, SLNA made it very difficult for Hanoi FC to score.

Key players like Nguyen Quang Hai, Pape Omar and Nguyen Van Quyet were marked so tightly that they could not play the way they would have liked.

The first real whiff that Hanoi got was as late as in the 44th minute when Nguyen Van Quyet passed the ball back to Truong Van Thai Quy as he ran up to get a shot. But it hit a SLNA defender and the chance went abegging.

The game was also interrupted several times because of injuries. Pham Van Nam, in his first start for Hanoi, damaged his knee after a wrong landing. He only played for 16 minutes and was subbed out for Pham Viet Truong, who hasn’t played any minute in V. League this season either.

SLNA also had to sub their players out because of injuries. Tran Dinh Dong after trying to tackle Nguyen Van Quyet got injured and left the field on a stretcher.

When Hanoi’s attackers were neutralized, their defense came to the rescue.

Centre-back Nguyen Thanh Chung left his position to support an attack and as Pape Omar crossed in, the defender got in a bullet header to score the only goal of the game, in the 55th minute. 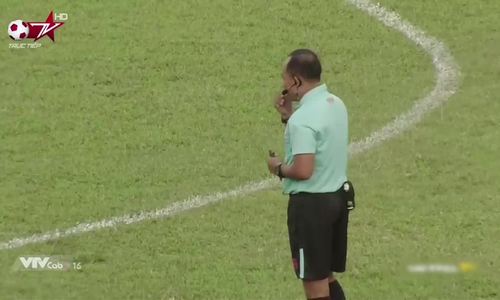 SLNA switched to offense after conceding, but the 1-0 score stayed.

With the victory, Hanoi had 52 points after 24 matches and won the league with two games to spare. They will get to lift the trophy at home after the last two rounds.

This is their fifth domestic league title, making them the most decorated club in the history of V. League.

The capital club have another title in their sights when they face North Korea’s April 25 FC in the first leg of the AFC Cup interzone final on September 25 at the Hang Day Stadium.