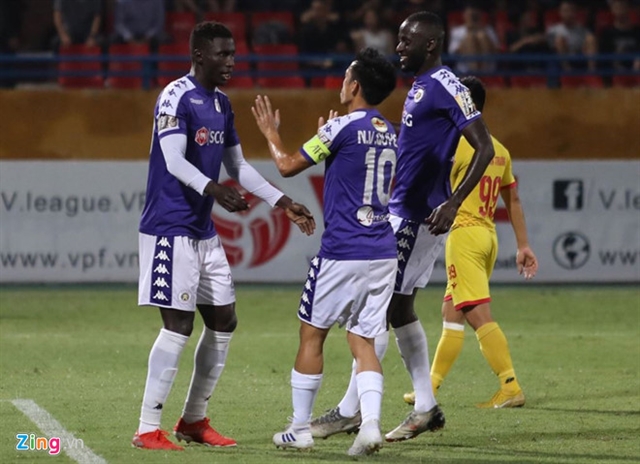 Striker Nguyễn Văn Quyết (middle) of Hà Nội celebrates with his teammates in the 6-1 win against Nam Định in the V.League 1 yesterday. Photo zing.vn

The win at Hàng Đẫy Stadium in the capital leaves Ha Noi on 46 points, five ahead of second-placed HCM City FC with only four games left in the season.

The hosts opened the scoring, but they didn’t have it all their way in the early going.

However, the visitors struck back in the 22nd minute, with Diogo Pereira heading home powerfully from a corner past goalie Nguyễn Văn Công.

The defending champions were undeterred and retook the lead six minutes later, as Phú’s mistake gave Quyết a simple finish.

The captain grabbed his brace in the 37th minute, scoring thanks to a delightful chipped through ball by star midfielder Nguyễn Quang Hải.

The first half ended without further incident, bar Hai picking up a yellow card for a foul.

After the break Quyết turned provider, crossing for French striker Papa Ibou Kébé, who finished with aplomb and made it 4-1.

The game was then stopped for several minutes after a female Hà Nội fan was injured by a flare, reportedly shot by Nam Định fans. She was hurried to the hospital.

In the 68th minute, Faye added the fifth, before former national team star Phạm Thành Lương scored towards the end to put the icing on the cake of a 6-1 win.

The result leaves the capital side in pole position to defend their title. They face Viettel at home on Sunday, while HCM City FC travel to Nam Định. VNS