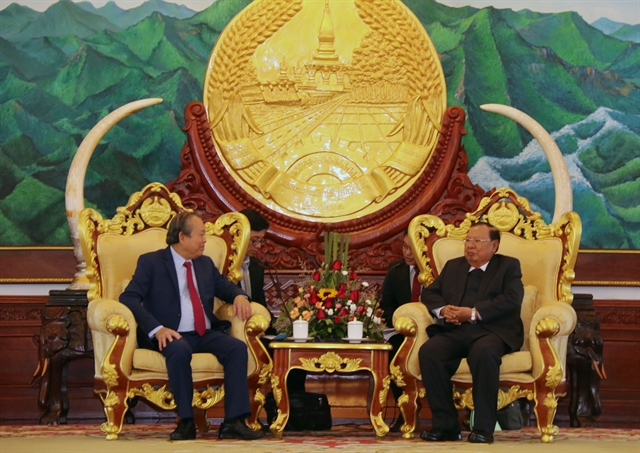 The Vietnamese Deputy PM congratulated Laos on its recent achievements and informed his hosts of the outcomes of talks with his Lao counterpart Bounthong Chithmany.

He said ministries and sectors were reviewing the implementation of agreements between the two countries’ leaders. They were also working hard to prepare for important diplomatic activities in early 2020, including the 42nd meeting of the Inter-Governmental Committee.

Welcoming Bình’s visit, the Lao leaders congratulated Việt Nam on its recent successes, especially at the 30th SEA Games in the Philippines, including the gold medal won by the men’s football team.

They said the Party, State, Government and people of Laos always treasured and gave highest priority to the enhancement of their great relationship, special solidarity and comprehensive co-operation with Việt Nam, considering them vital to both nations’ revolutionary causes.

Party General Secretary and President Bounnhang Vorachith agreed that Laos would co-ordinate with Việt Nam to promote and organise big anniversaries in 2020, including the 90th anniversary of the Communist Party of Việt Nam and the 65th founding anniversary of the Lao People’s Revolutionary Party.

He also expressed his hope that the two sides would focus on developing a border of peace, stability, friendship, co-operation and comprehensive development, while improving living standards for border residents and co-ordinating to deal with irregular migration, undocumented marriages, naturalisation and drug crime.

The host leader agreed to continue to create favourable conditions for the Vietnamese community in Laos to help them contribute to local development and bilateral ties.

He agreed to maintain mutual high-ranking visits and meetings, co-ordinate to review and promote the implementation of high-level agreements reached in 2019, and prepare for the 42nd meeting of the Inter-Governmental Committee early next year.

The Lao side would also ensure the quality and implementation pace of important projects, including the Hà Nội-Vientiane expressway and the Vientiane-Vũng Áng railway projects, the PM added.

At a meeting with Chief Justice of the People’s Supreme Court of Laos Khampha Xengdala, Deputy PM Bình said judicial co-operation was an important field for both sides, noting it had enjoyed many breakthrough developments.

Việt Nam was ready to assist the supreme court and other courts in Laos to develop their judicial work, he added.

The Lao official appreciated the Government and the Supreme People’s Court of Việt Nam for assisting his country’s court and judicial sector, suggesting the two sides further share judicial experience, boost co-operation and work together on training personnel. — VNS