Known as Patient 19, the 64-year-old woman suffered life-threatening emergency cardiac arrests several times and seemed to unlikely to survive, but now, her health has been stable, with seven negative tests for SARS-CoV-2 and she is eligible to be discharged, the hospital announced on May 26.

The patient was admitted to the hospital on March 7, after her niece – Patient 17 – the first confirmed case in Hanoi – was declared infected with COVID-19. She is the most severely ill among other COVID-19 patients treated at the hospital to date. Patient 19 has had to rely on invasive mechanical ventilation and extracorporeal membrane oxygenation (ECMO) support, as well as having suffered from cardiac arrests that forced doctors to provide emergency care for over 40 minutes in order to save her life.

After 80 days under active treatment, the patient is now awake with good communication, no fever, no shortness of breath and normal heart and lung functions. She has had seven negative test results for SARS-CoV-2 on March 26, March 27, March 29, April 2, April 8, April 15 and April 30.

Doctor Dong Phu Khiem, Deputy Head of Department of Positive Recovery at the hospital, said that the treatment and recovery of Patient 19 is particularly impressive compared to the treatment process for hundreds of other COVID-19 patients there. She not only has had the longest course of treatment and is among two cases that were required to use ECMO but she also joined doctors through the most dangerous moments to reach this most spectacular of recoveries.

The patient was transferred to the hospital on March 7. Nine days after, she suddenly had severe lung damage of up to 80% as her lungs were almost ‘white’. Later, she quickly succumbed to respiratory failure, with shortness of breath and high fever. On March 16, doctors had to give the patient emergency ventilation.

Her health worsened as she had kidney failure and needed dialysis. By March 18, the patient’s condition had changed severely, with difficulty breathing and a large amount of lung damage.

By April 4, she was breathing on her own and gave up ECMO, as her situation had gradually improved. Doctors rejoiced as her treatment had complete 70% of its journey. However, a sudden downturn occurred when the virus attacked her heart.

At 0:45 am on April 8, she suddenly had an arrhythmia and blood stopped circulating, then fell into a coma. After 40 minutes of emergency attention with eight people taking turns pressing her heart, fortunately the patient had a heartbeat again despite a time when it seemed that she would not make it. 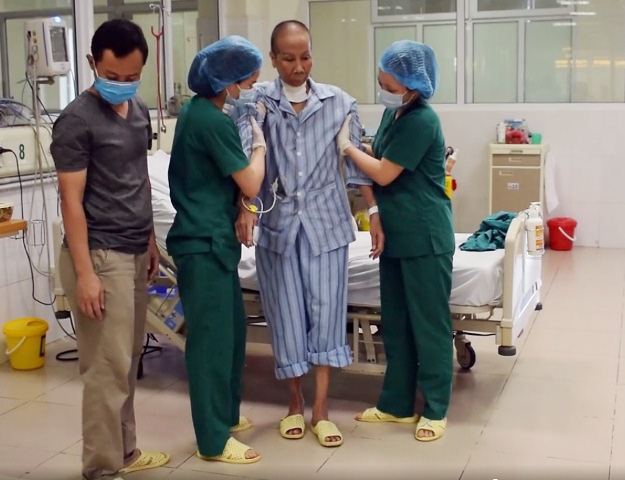 Seeming unable to survive many times during her treatment, Patient 19 is now in stable health and has tested negative for SARS-CoV-2 seven times, meaning she is now eligible for the all-clear.

Khiem said that luckily for her the cease in circulation left no sequelae, especially sequelae of nerve damage. Patient 19 has at one time seemed to be unable to survive, but thanks to the support of so many machines and the relentless efforts of doctors, she was revived “from the dead” spectacularly.

It is expected that Patient 19 will be officially declared as recovered tomorrow morning, along with other two cases, Patient 52 and 324, who had also consecutive negative test results.

Patient 19 is among only three critically ill COVID-19 patients in Vietnam so far, with the remaining two having also been declared as free from the coronavirus. They are Patient 161 (88 years old), the oldest COVID-19 patient in Vietnam, and Patient 91, a 43-year-old British pilot, who has tested negative several times for SARS-CoV-2 but is still in critical condition as he is undergoing intensive care in Ho Chi Minh City awaiting a lung transplantation.

Professor, Dr. Nguyen Van Kinh, former Director of the National Hospital for Tropical Diseases, said that the conditions for proclaiming recoveries from COVID-19 is that patients have no fever for three days and have had two consecutive negative tests for SARS-CoV-2. However, Vietnam is more careful, as COVID-19 patients are only announced as recovered after testing negative 3-4 times.

To date, the National Hospital for Tropical Diseases has treated eight severely ill patients who were needed oxygen therapy and support from assistive devices. Besides respiratory disorders, many of them have blood clotting disorders. With a successful record of fighting SARS and other influenzae, the hospital has so far saved many COVID-19 patients admitted to the medical facility, whether they are in severe or mild conditions.

Regarding Patient 19, Dr. Kinh said that she was one of two cases that had to use ECMO at the hospital. Fortunately, with the great supervision of doctors and the stellar emergency care they provided, the patient has made a miraculous recovery.

As of 2 pm on May 26, Vietnam did not record any new cases of COVID-19, with the tally remaining at 326. Among them, 275 COVID-19 patients have fully recovered, while 11 others have had negative test results at least once.

Today also marked the 40th consecutive day the country has gone without a new community transmission.