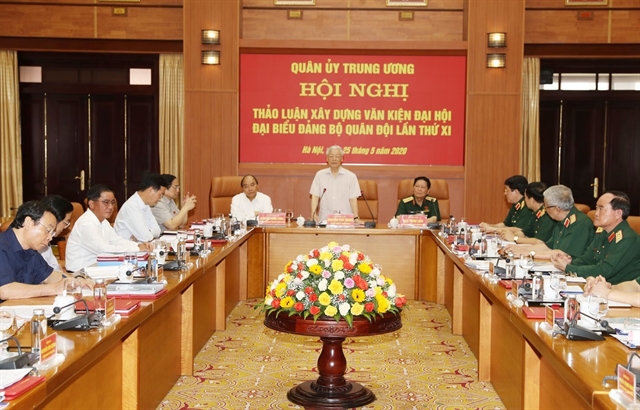 HÀ NỘI — The Central Military Commission held a conference in Hà Nội on Monday to collect feedback on draft documents to be submitted to the 11th Party Congress of the Việt Nam People’s Army (VPA).

In his remarks, Party General Secretary, President Nguyễn Phú Trọng, who is also Secretary of the Commission, said he appreciated the quality of the documents and asked delegates to candidly contribute opinions.

The draft political report stated that over the last five years the Commission and the Ministry of National Defence have fully performed their roles as strategic advisors of the Party and the State in military and national defence affairs.

It also highlighted the improved strength and combat preparedness of the VPA, along with reforms in training and drill work and effective defence diplomacy, which have contributed to defending the country and improving the position and prestige of the VPA and Việt Nam in the international arena.

Conference delegates agreed on the content and basic orientations for the implementation of military and Party building tasks for the 2020-25 tenure and the years to come.

Accordingly, the Party’s absolute and direct leadership of the VPA will be maintained and enhanced and greater efforts will be made to build a pure and strong Party Committee in the VPA and a revolutionary, regular, elite, and modern army.

The entire army will also maintain high combat preparedness to protect the country and contribute to ensuring a peaceful and stable environment for national construction and development.

Delegates shared views that personnel tasks must be prepared thoroughly at the Congress with a high sense of responsibility and democracy and be in line with procedures and principles. — VNS

Over 20 kilogrammes of drugs found inside fast-delivery parcels