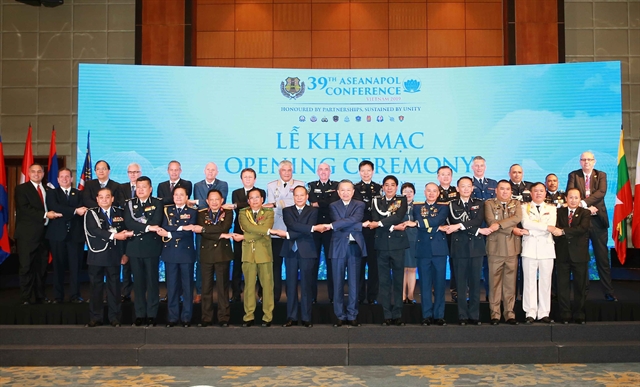 HÀ NỘI — A senior government official has revealed the ASEAN region is facing many challenges, especially in security and social order.

Minister of Public Security, General Tô Lâm was speaking at the opening ceremony of the 39th ASEAN Chiefs of National Police (ASEANAPOL) held in Hà Nội on Wednesday.

He listed a number of serious crimes that threaten the safety of the region, including terrorism, cyber-attacks, adding that dealing with transnational criminals is complicated and unpredictable.

“In such circumstance, the role of law enforcement agencies of ASEAN including the Police Force is indispensable in the fight against crimes, maintaining national security and social order,” Lâm said.

Three hundred representatives from 10 ASEAN countries and 10 other countries will be attending the three day event.

At the end of the conference, three key personal will be appointed to the roles of Director of Plan and Program, Director of the Police Services, and the ASEANAPOL Secretariat in 2020-21, and decide the ASEANAPOL observer status at the request of the French National Police, Royal Canadian Police and proposal to be upgraded to a dialogue partner from the UK National Crime Prevention Services.

Representatives of the MPS will use the event to speak with other agencies from around the world, including INTERPOL and the UK National Crime Prevention Service.

At the end of the conference, the 10 chiefs of ASEANAPOL member countries will sign a joint communique of the 39th ASEANPOL Conference affirming the cooperation contents that ASEANAPOL will carry on in 2020.

Regarding Việt Nam’s cooperation mechanism with other countries in the region, Vệ said Việt Nam regularly cooperated and exchanged with countries around the world.

However, there have not been any proposals relating to the coordination in the pursuit of terrorism crimes. Việt Nam has worked with ASEANAPOL and INTERPOL to arrest and handover criminals hiding in the country, he said.

“But there are several cases carried out by individuals including a petrol bomb attack at a garage in Đồng Nai Province and package mail explosion in Linh Đàm Urban Area in Hà Nội’s Hoàng Mai District.”

He said the Vietnamese Party, State and Government is serious about expanding collaboration with international friends in diverse areas.

As Việt Nam was elected as a non-permanent member of the United Nations Security Council for the 2020-21 tenure, and the country will be ASEAN Chair in 2020, the Vietnamese Government encourages the Vietnamese Ministry of Public Security and public security forces to boost cooperation with police forces of foreign countries, especially with those from ASEAN, dialogue partners and international legal enforcement agencies concerned in the fight against trans-national crimes, he said.

According to the PM, ASEANAPOL has played an active role in international cooperation fighting trans-national crimes and maintaining peace in the region over almost four decades.

He asked ASEANAPOL member countries to enhance their joint work on investigating and uncovering trans-national crime cases, share professional expertise with high sense of responsibility and mutual trust for the sake of a united and prosperous bloc.

The leader hoped the 39th ASEANAPOL would give feasible solutions to improve the efficiency of cooperation among ASEAN police in the near future.

The Vietnamese Government and public security force will make utmost efforts to ensure the best business environment, contributing to security, progress and prosperity in the region and the world, he said.

General Muhammad Tito Karnavian, Chief of the Indonesian National Police, attributed Việt Nam’s success to sound directions of the Government and progress in maintaining security and social safety and order.

He said via ASEANAPOL mechanism and regional security maintenance, ASEAN member states will find it easier to develop their economies. — VNS

How China weaponizes COVID-19 in the East Vietnam Sea