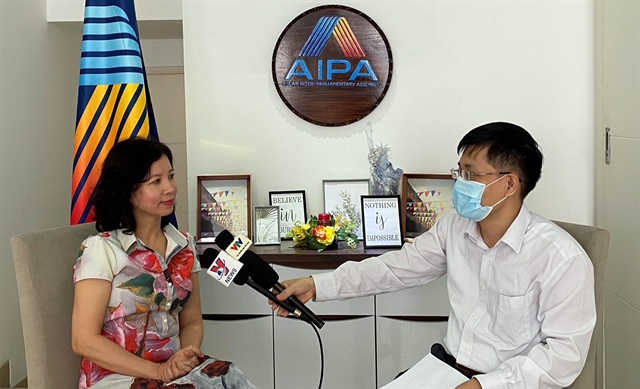 JAKARTA — Leaders of ASEAN countries and the ASEAN Inter-Parliamentary Assembly (AIPA) will hold a teleconferenced dialogue today, during which they will show their commitment to enhancing solidarity within the bloc and its relations with partners to cope with challenges and build a sustainable community.

The dialogue will take place within the framework of the 36th ASEAN Summit.

Talking to the Vietnam News Agency, AIPA Secretary-General Nguyễn Tường Vân said the annual dialogue, first held in 2009, demonstrates ASEAN and AIPA leaders’ pledge to strengthen co-operation between the bloc’s executive and legislative bodies in resolving common issues of concern in the region.

She said that at the upcoming event, ASEAN 2020 Chair Prime Minister Nguyễn Xuân Phúc, AIPA Chair National Assembly (NA) Chairwoman Nguyễn Thị Kim Ngân, and leaders from other ASEAN governments and parliaments will confirm their commitment to enhancing the bloc’s solidarity and unanimity, highlight ASEAN’s centrality, and strengthen its relations with partners to deal with COVID-19 and other fierce challenges, including strategic competition among superpowers along with traditional and non-traditional security issues.

The AIPA Chair is expected to emphasise its readiness to stand with ASEAN in building a sustainable community that is peaceful, stable, based on law and united, and that centres on people for common development.

During that process, AIPA and member parliaments have been contributing to the building of an ‘ASEAN common house’, promoting legal harmonisation, and increasing supervision over the implementation of commitments, ASEAN Community blueprints, and the bloc’s co-operation policies, according to Vân.

She also said that Việt Nam’s concurrent roles as ASEAN Chair, Chair of the 41st AIPA General Assembly, and non-permanent member of the UN Security Council confirm the country’s growing stature in the region and world.

Aside from opportunities, the increasingly fierce challenges facing the ASEAN Community also put great pressure on Việt Nam, she added.

Taking COVID-19 as an example, Vân noted that, as AIPA Chair, the Vietnamese NA took timely and active measures to work with other member parliaments to cope with its spread.

Chairwoman Ngân sent a letter to AIPA members calling for joint efforts to fight the pandemic. The NA also chaired and took part in online regional meetings to discuss response measures and share experience via phone calls, and provided some AIPA members and other countries with medical supplies.

With the support of the International Conservation Caucus Foundation, the NA recently hosted an online meeting with AIPA parliamentarians to look into the illegal wildlife trade, its connections with COVID-19, and ways to prevent future diseases.

Vân said Việt Nam’s successes in pandemic control and economic recovery in the year it serves as Chair of both ASEAN and AIPA have been recognised by the international community and ASEAN countries. — VNS